Power profits and the consumer

New Zealand’s energy pricing over the last twenty years was thoroughly canvassed by Dr Geoff Bertram last year in a paper presented to the Fabian Society as part of its “Light-handed Regulation” series.  The paper can be found here, and in the light of the Labour/Greens’ announcement last week about NZ Power is well worth a read.

the unifying theme of energy sector policy since 1986 has been to facilitate the gouging of wealth, from the poor and the powerless, for the benefit of the rich, the strong, and the Treasury. The wealth transfers in energy, taken on their own, account for only a part of the enormous growth of income and wealth inequality across the New Zealand economy over the past two decades – only a few percentage points of GDP, a few billion dollars here and a few billion dollars there, have been shifted from poor to rich via electricity and gas pricing. 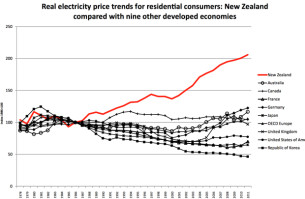 The paper is extensively referenced with plenty of graphs. This one is particularly relevant.

Geoff is a fiercely independent analyst and in his view all governing parties as well as state agencies bear some responsibility for the fact that consumers have been unfairly treated through the period to date.

At the time of writing, he saw no evidence of any will to regulate:

In New Zealand the policy landscape in relation to electricity generation and retailing remains virtually unchanged – apart from the rush by Treasury to raise several billion dollars in cash by unloading three bloated electricity SOEs onto private investors.

It is noteworthy that the political will to regulate showed up for the natural monopoly – gas pipelines and electricity networks – only after they had locked-in their wealth transfers from a shift to monopolistic limit pricing. The political will to regulate generation and retail today would put immediately at risk several billion dollars of so-called fair value” in the SOE books, which Treasury is seeking to convert to cash revenue via share floats.
These wealth transfers are not yet locked in and are subject to genuine regulatory risk – which surely provides a clue as to why there is no regulation on the horizon. Reluctantly closing the stable door after the horse has bolted – after the big wealth transfers from consumers in those sectors had been banked and locked in via balance-sheet revaluations and ownership transfers in gas and electricity networks – is much easier than tackling sectors where predation is ongoing and in mid-flight – airports and electricity gentailing being leading examples.

But at least now with NZPower there are parties with the political will to regulate monopoly price-setting.  David Shearer Labour and Russel Norman for the Greens have signalled that they will restore some balance so household and family consumers get a long-overdue fair go.

16 comments on “Power profits and the consumer ”