Sometimes – very occasionally – this government gets something right:

Govt to roll out plain packaging on cigarettes

Nearly a week after hitting smokers in the pocket with increased taxes, the Government will roll out a second hit tomorrow [yesterday], this time aimed at tobacco companies.
…
The move was initiated by former Associate Health Minister Dame Tariana Turia more than five years ago, but it stalled when big tobacco started taking other governments to court.

Legal action failed in Australia last year, and Prime Minister John Key says that has allowed New Zealand to press ahead. “What’s happened is the world’s moved on and there have been a number of countries that have moved toward plain packaging. The advice I’ve been getting is that it’s safe to proceed.
…
Dame Tariana is “very happy” with the development and says it will hurt tobacco companies and discourage smoking. …

The announcement duly went ahead yesterday: 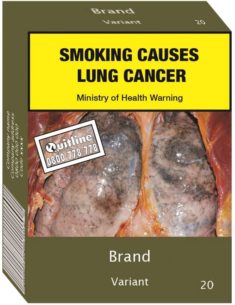 Plain packaging for tobacco likely to be in place early next year
…
The packaging was revealed at a smokefree event on Wellington’s waterfront and could be rolled out early next year. The prop design at the event is not the final design – the Government will now consult on plain packaging, including design for packs.
…
“The design and appearance of cigarette packets are powerful marketing tools for vendors. The Government is proposing to use the standard brown-green packaging which is similar to what is used in Australia,” Mr Lotu-Iiga said.

“We’re proposing that mandatory health warnings will cover at least 75 per cent of the front of the packs and all tobacco imagery will be removed. Brand names will be allowed but regulations will standardise how and where the printing is. …”

A good move, and long overdue.

48 comments on “Progress on plain packaging ”