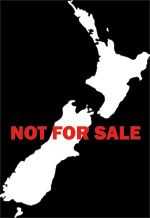 The government has made a series of moves to prevent strategic New Zealand assets being exploited by foreign companies. Last week tax law was changed to prevent the Canadian Pension Fund avoiding tax in its bid for Auckland Airport. Yesterday, the government changed the Overseas Investment Act to give Ministers veto power when strategic land is up for sale. The government will also change tax law to stop oil drilling companies offsetting costs from their foreign operations against their tax in New Zealand; previously foreign companies were able to extract our oil and sell it without New Zealand getting our share in tax.

It is good to see the government taking this stance to protect our assets. Already, foreign owners take $15.4 billion (8% of our GDP) in profits from the work of New Zealanders every year, most of it dividends from former public assets that were sold off too cheaply in the 1980s and ’90s. Foreign owners also have a bad record of asset-stripping the New Zealand companies they own; extracting maximum profits while running important pieces of infrastructure (like our rail network) into the ground. We do not need more prime New Zealand assets falling into foreign hands.

Other parties have warmly received the government’s moves, except for National, which has been conspicuously silent. The public deserves to know: would Key have acted as the government did or would he have stood by while foreign companies bled this country?