Yesterday evening there was an Aotearoa is Not For Sale, anti-asset sales protest in Auckland city, that included an anti-TPPA element.  It was a curtain raiser for a TPPA Day of Action today, with protests in Nelson and Auckland.  Friday evening’s demonstration celebrated getting close to the target number of signatures required on the petition for a referendum on Asset Sales.  It was also to encourage people to re-energise for the last push to reach the target number of signatures. 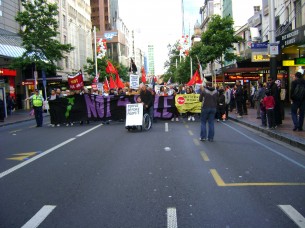 The anti-asset sales march began outside Britomart Station, central Auckland a little after 6pm, with a chill wind blowing and blustery showers.  The march of several hundred people (I’m hopeless at estimating crowd sizes) walked noisily up Queen street and arrived in Aotea Square in the calm evening sunshine. 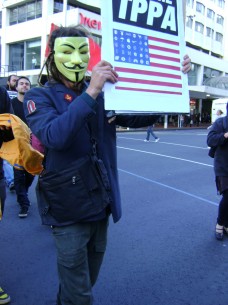 At the beginning, the guy on the megaphone welcomed the women from the on-going state housing protest in Glen Innes. He praised the women for being at the forefront of the fight against asset sales.The participants in the march included people from the Green, Mana and Labour Parties, Socialist Aotearoa, someone carrying a nurses banner, some people with climate change placards, one dressed as the climate change “elephant in the room“, and many others: a diverse and lively crowd.  On the walk up Queen Street we often stopped to chant in front of passersby, sometimes blocking intersections – this seemed to annoy one of the car drivers who sat on their horn for a long time.

As we neared Wellesley Street a group of Hare Krishnas walked on the pavement beside us, singing their chorus with drums and hand cymbals.  The competition with our chants was festive and energising. 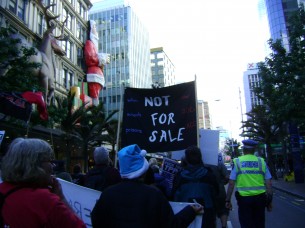 At Aotea Square we gathered on the grass in front of the town hall for some short speeches.  Russell from the Maritime Union spoke first.

Then the women from Glen Innes, leaders of the struggle against asset theft, took a stage call. They were introduced with reference to the introduction of state housing back in the 1930s.  The Labour Party people responsible for that were largely working class men. Today the majority of those at the forefront of the struggle against the removal of state housing are women. 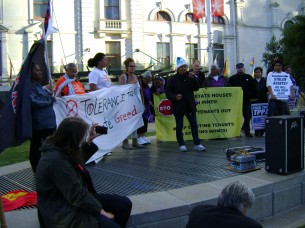 Gareth Hughes was commended on his big effort in enthusiastically leading the gathering of signatures for the referendum petition.  He said they now had 350,000 signatures, and that the target of 410,000 should be reached pretty soon.  Meanwhile Laila Harre continued to gather signatures at the edge of the crowd.

As well as speaking against asset sales, Phil Twyford called the government out for many of the unacceptable things it was doing, including the demonising of beneficiaries.

Sian from Aotearoa Is Not for Sale, and Socialist Aotearoa gave her first ever speech, saying that our assets shouldn’t be run for profit, but should be run for the people.  Hone Harawira, who had a tangi to attend, sent a  message of support, and John Minto spoke for Mana.

Jane Kelsey repeated some of the things she said in the last 2 Citizen A‘s.  She said TPP would shut down the use of the Internet in an easy and affordable way. (See Geoff Cumming, NZH article this morning on Internet & copyright issues.) Kelsey also said that Key’s government wanted to sell off the assets so that TPP would lock them in.  It would be almost impossible to get them back without multinational corporations suing the NZ government.  Kelsey directed her accusing eyes at the Sky Tower needle that looms behind Aotea Square.  The TPP negotiations are being conducted in secrecy in Sky City.  It was there that she was looking when she lead the chant – Shame! Shame! Shame. 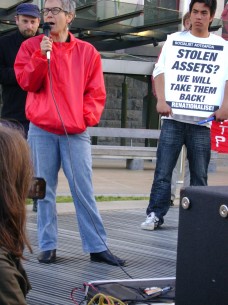 Kelsey said that the march today would be leaving Aotea Square promptly at 2.00 pm, because they needed to arrive at Sky City by 2.30 pm to deliver the Avaaz petition.  Someone suggested people should aim to get to the Square around 1.30 pm.  Kelsey announced there would be some street theatre at Sky City.

Actions – in the next few days in NZ (mostly Auckland):

[I hope today’s protests go well.  I am unable to go]

[Update] I have not seen one MSM report of last night’s peaceful and good humoured demonstration.  Today’s demo makes headlines because there was violence.  There is a little mention of the reasons for the protest buried at the bottom of the article.  And of course, it’s the protesters who were being violent according to the MSM.

Reports from RNZ, 3 News (there was more focus on the violence in the 6pm TV news), NewstalkZB, Stuff.  John Minto is critical of stupid and provocative policing.  Video in support of allegations that a woman protester was punched in the face by a police officer. GPJA claims it was stupid and provocative policing that caused the violence. Bomber says the media only turned up after they heard there was violence happening.