Protests then and now

The usual National Party cheerleaders in the media are trying to make out the modest size of the protests at the Nat’s conference in the weekend means that opposition to National is weak. John Armstrong writes:

Contrary to the impression given by some accounts, the 400 or so party faithful did not spend their weekend cowering inside Auckland’s SkyCity Convention Centre behind a not-so-thin blue line of police.

Is that right John? According to TVNZ:

Hundreds of protesters swarmed the SkyCity Convention in Auckland yesterday afternoon, in an attempt to interrupt the National Party annual conference. … Around 300 people took part in the protest, which included a group from the Auckland-based student movement Blockade The Budget.

Here’s an image from the video – looks like a long yellow line with a decent crowd outside to me: 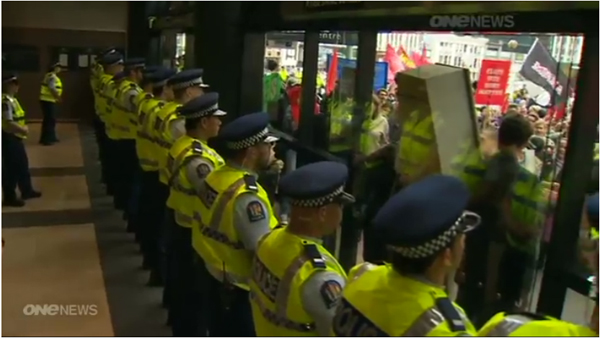 Just by way of contrast, let’s cast our minds back to 2008, the last conference of the then Labour government. At the height of the media’s anti EFA hysteria the total protest on that issue consisted of “John Boscawen and a dozen or so supporters”. There were a few leftie groups protesting at the conference too, but the protests tended to look like this: Compare with the National party conference above!

[The best measure of opposition to asset sales is surely the referendum petition. The Greens alone are collecting nearly 2,000 signatures a day. Eddie]

19 comments on “Protests then and now ”