Puddleglum: We no longer have a Prime Minister

Puddleglum at Political Scientist has an excellent post that you should read all of  Here are a couple of lengthy extracts, but go and read it all:

Having just listened to an item featuring John Key on Checkpoint (National Radio) I now have to announce that New Zealand has no-one at present performing the proper role of Prime Minister.

John Key could not have acted less Prime Ministerial if he had tried. Sadly, it’s becoming a habit for him.

Beginning at about 1min25secs in the audio (just below or in the link above) John Key manages to both trivialise the seriousness of the broad allegations that surround his government and turn these serious issues into the pettiest of political point scoring and the weakest and – because of what it says about his capacity to take responsibility – the most alarming of ‘challenges’ to David Cunliffe.

“But I think this sort of quaint little notion, but that there’s a lot more going on or that the left of politics don’t talk to bloggers, don’t do things, all the rest of it, it’s a lovely little notion that might be running around David Cunliffe’s head but it ain’t reality” …

An inquiry into the actions of the Labour Party between 1999 and 2008?? What is John Key on about? Does he have some documented evidence (e.g., a well-researched book and a swag of emails) that suggest the need for a full inquiry into that period?

Key was quoted as saying:

“The left have sat there and they’ve said we’re not going to win if we talk about the economy, law and order, health and education so let’s illegally hack into a computer and throw a bomb in.”

This is either a worrying turn to paranoia by John Key or an ill-thought out and completely incorrect and misleading utterance. “The left“? “They’ve said”? “[S]o [let us] illegally hack into a computer“?

What is this monolithic ‘left’ monster in which John Key appears to fervently believe? What huge conspiracy does his fevered mind believe is plotting against him? Is it hundreds of foes? Thousands? Tens of thousands? Where do they meet? How do they communicate their wicked plans?

And what’s this claim about ‘the left’ having said to itself that “we’re not going to win if we talk about the economy, law and order, health and education“?

As Key announces a ridiculous enquiry into whether a single hair on Judith Collins’ head is clean, rather than looking at the bog she’s waded into, this cartoon on Stuff today seems appropriate: 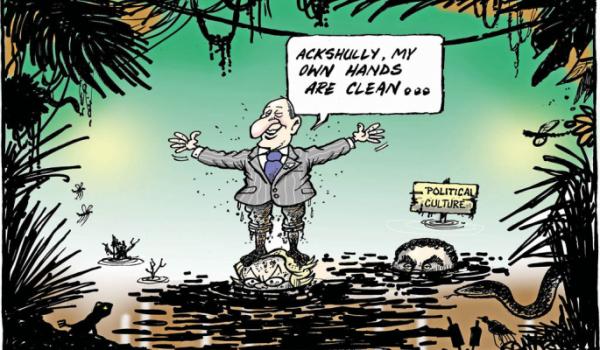 Also a good read is Chris Barton on the Herald showing a little media self-reflection.

And interesting: The Worm turned down for Key in last Thursday’s Leader’s debate.

34 comments on “Puddleglum: We no longer have a Prime Minister ”