The John Batchelor show regularly interviews Stephen Cohen, one of the United States’ most accomplished Russia experts and a contributing editor at The Nation magazine.

In this excellent radio interview, Cohen and Batchelor tease out the background details of this latest important event in Syria.

If you have 39 minutes, it is well worth listening to.

In essence, western commentators are surprised at Putin’s sudden partial withdrawal from Syria, because they do not pay any attention to what Putin says in his many transparent public comments and statements, almost all of which are translated into English on the official Kremlin website. 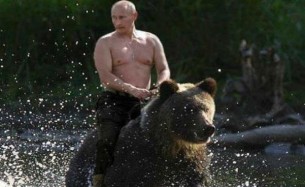 From the start of the Russian intervention, Putin has said that Russia was there to secure the legitimate government of Syria – Assad’s regime – and to take out the Islamic extremist terrorists operating in the country – while making sure the option of a negotiated political settlement was on the table.

All of these goals have been achieved. Russia was never there to help Assad recapture all of Syria. Or to help Iran dominate Syrian politics as they now do Iraqi politics. (The latter gives us a clue as to why Israel may have accepted the Russian intervention from the beginning).

Putin’s primary geopolitical goal as always has been to safeguard the future development of Russia after it suffered two massive collapses in the last 100 years.

Putin has stabilised and begun to demilitarise the Syrian situation by bolstering on the ground the position of the minorities in Syria: the Kurds, the Alawites (Assad’s religious group), the Christians, the Druze, the Yazidis, and others.

All of these groups – and women in general – would have been persecuted as second class citizens – or targets of genocide – under ISIS rule.

Anti-Assad rebel groups which lay down arms, get to join the internationally negotiated political process to determine the future of Syria and the Syrian government.

Now Russia has prevented the black ISIS flag from being run up over Damascus, and killed hundreds or thousands of Islamic terrorists who would have soon infiltrated back into the Russian caucuses.

Cohen says very simply – Russia needs a stable, diverse world in order to fully recover its internal and geopolitical power, and that is what it is striving for.

Cohen makes an additional point about the decision making of “The Collective Putin.” In the West, Putin is usually portrayed by the propaganda as a despotic dictator. Of course, that is impossible in a country as large as Russia (which spans ELEVEN time zones).

The truth is that Putin needs to keep many other powerful players in and around the Kremlin happy, if he is going to keep his own position secure.