Labour will be pleased at the reaction to its Latest housing policy. Vernon Small – perhaps the best neutral commentator? – had this to say:

Homes for Kiwis plan may be a winner

It has to be said from the outset, Labour’s newly minted “foreigner ban” on buying existing residential houses has a lot more going for it than the late and unlamented “man ban”.

For a start there is not a big constituency of voters to turn off among property investors who are not even in the country. It reminds you of that old joke that the best people to tax are foreigners living abroad.

And it is a fair bet the idea will win public favour, given the overwhelming opposition to any sell-off of Kiwi assets that shows up in most polls. Prime Minister John Key tapped into it in 2010, when land sales rules were being revised, by voicing concerns Kiwis may become “tenants in their own land”. …

Labour’s plan to build and on-sell 10,000 affordable homes a year – alongside a promise of more state houses – remains its most potent weapon.

Nat friendly John Armstrong is (as usual) all about the game:

Labour’s plan to bar foreigners from buying existing homes may turn out to be riddled with more holes than a block of Swiss cheese in terms of likely effectiveness. The policy may be condemned as unworthy of a party which has always scrupulously avoided playing the race card. Whichever way you look at it, however, promising such a ban is still darned good politics.

In one swoop, David Shearer has got people talking about what he wants to talk about – instead of endlessly debating whether he can cling on as Labour’s leader.

When Labour’s opponents shout “xenophobia” or “racism”, Shearer only needs to say Labour is merely copying what Australia is doing to curb soaring house prices.

Crucially, the policy is very much in tune with public opinion, judging from a 3News Reid Research poll taken back in February which found two-thirds of respondents favouring restrictions on foreigners buying property.

The commentator who surprises me most is Colin Espiner – usually a ranting tory – but here he weighs in with a (mostly) excellent piece:

I never thought I’d say this, but John Key ought to be just a little worried about David Shearer’s latest policy.

Labour’s proposal to ban foreign investors from buying existing residential homes in New Zealand is likely to be extremely popular with the public. In fact I’d go so far as to say it’s likely to be the most well-received policy Labour has come up with since its plan to renationalise the electricity sector, with the bonus that it’s actually a good idea as well. …

The rationale for the policy is that one of the main reasons for our overheated housing market is too much demand and not enough supply. Stopping foreigners from bidding in the residential market removes some of that demand and returns a bit more supply. …

Key’s reaction to Shearer’s policy is predictable: he says it’s ”desperate”, that the number of people who will fit the category is “very small”, that people will find loopholes to get around the new rules, and that the policy is xenophobic – in essence, a dog-whistle to racists who resent buyers of certain ethnicities crowding the auction rooms, particularly in Auckland. …

I don’t agree that Labour is being xenophobic with this policy, though I accept it will appeal to rednecks. Protecting a country’s housing stock from foreign investors looking for a quick buck isn’t racist – it’s common sense. It would only be racist if it applied solely to certain ethnic groups, and I don’t see Labour proposing any such thing.

As for the argument that this is an attack on Chinese because they are the biggest overseas buyers, that’s bunkum too. English and South Africans are also in the top four, alongside Australians (who are excluded from the policy) but I don’t hear anyone complaining Labour is discriminating against Brits.

Australia already has rules in place limiting foreign purchases of houses, while America, Britain, Singapore, and Hong Kong have gone down the route of imposing extra taxes to achieve the same ends.

I’ve read claims in the past couple of days that such a ban could contravene our free trade agreement with China or discourage foreign investment in New Zealand generally. I find both arguments weak. …

In sum, what the electorate will see is that Labour is proposing solutions to a pressing problem while the Government is sitting on its hands.

In short, I am impressed with the coverage from all three. It means that the only folk peddling the “race card” attacks are the likes of John Banks, Cameron Slater, and Judith Collins. ‘Nuff said I think. 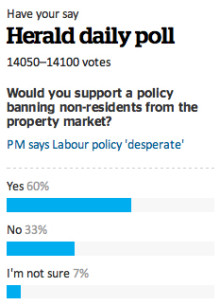 As for popularity with the electorate, the poll cited by Armstrong provides good evidence. Also, both The Herald and Stuff ran their (unscientific) online polls yesterday, The Herald’s is to the right.

Stuff’s poll disappeared from view very quickly, but looked very similar to The Herald’s when last I saw it.

Later in the day Stuff ran a second poll on a related topic (below). Between them such polls suggest that we the public are looking for leadership and action on housing. Labour are supplying it. National are not. 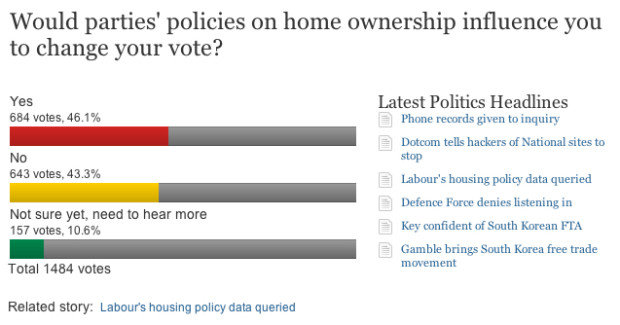