Remember 2008? Remember back when John Key sounded vaguely sane and reasonable? In a speech to the Public Service Association Congress in September 2008 Key said:

A new National Government is not going to radically reorganise the structure of the public sector. …

Few problems are solved by significant reorganisations – in fact, many more tend to be created. It is easy to underestimate the amount of energy and inspiration soaked up by institutional change, as well as the loss of personal and institutional knowledge.

Perhaps that John Key was kidnapped by aliens. Because as the icy waves of incompetence lap over the gunwales of the economy, the new John Key, clueless captain of our slowly sinking ship of state, is hard at work rearranging the deck chairs:

A working group would also be established to identify more reforms aimed at getting “value for money” from the public sector in future.

No doubt the first step in National’s grand plan will be to hire some more consultants on $1,000 a day contracts. Just like Auckland we’ll be outsourcing the work that we no longer have the staff to cover.

Then what? All they’ve identified is merging a handful of minor agencies. You could merge them all into one department and call it the Ministry of Silly Walks for all I care. What matters is that we get the public services we need at good value for money. But there’s no target for savings, and no sign that any of this paper shuffling and logo changing will help deliver them. And never mind the waste “of energy and inspiration soaked up by institutional change, as well as the loss of personal and institutional knowledge”…

Renaming, merging and splitting agencies is what a government does when it wants to look busy but has no ideas. Hard to believe it has only taken two and a half years for National to get to this point. 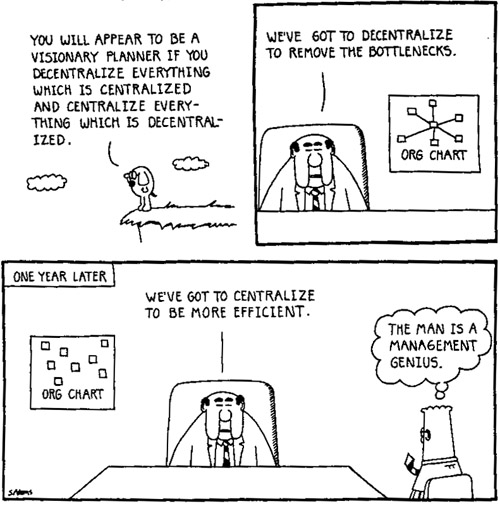 41 comments on “Rearranging the deck chairs ”