Frustration had rightly been growing at the lacklustre leadership of the recovery from Christchurch’s September earthquake. Obviously, this new quake is going to require a whole new level of energy and resource. I don’t think the government will be so negligent as to go at this half-arsed or half-cocked. Here’s some things it can do.

A proper plan
With so much destroyed, there is an opportunity to rebuild in a planned manner. What do we want Christchurch to be for? What economic activities should it be designed around? What issues like climate change and peak oil should planners take into account when redesigning Christchurch? This doesn’t have to be an incredibly drawn out process but it has to be done. Just rebuilding what was lost as if nothing has happened is a waste.

A dedicated Minister for Earthquake Recovery 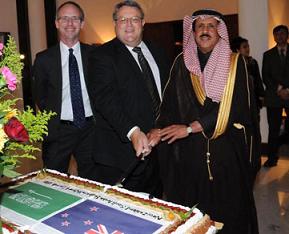 It’s ridiculous that the government passed the Canterbury Earthquake Response and Recovery Act (the Gerry Brownlee Enabling Act) claiming Brownlee needed the power to overturn or amend nearly any law on the books at a moment’s notice and, yet, being Earthquake Recovery Minister was occupying so little of his time that, when the new quake struck, he was over in Saudi Arabia leading a trade mission (to the right is a photo of him about the time the quake struck). The last public statement Brownlee made on Christchurch’s recovery was to reject the notion that the programme needed a more unified and driven leadership saying “the last Tsar got shot”

Brownlee has, apparently, spoken to John Key about being relieved of his other portfolios to focus solely on earthquake recovery. I think he should keep the other portfolios and we should get Simon Power in as Earthquake Recovery Minister. Where Brownlee is autocratic and heavy-handed, Power is deft and a uniter. Where Brownlee has failed to deliver on any of his policy initiatives and doesn’t show a good grasp of detail, Power is meticulous and comes through. Where Brownlee is lazy and pompus, Power works hard.

One of the first things I would expect Power to do as minister would be create a cross-party recovery committee of all the local MPs, electorate and list. There’s no place for political bickering in this and the MPs get that.

An Earthquake Recovery levy
The Crown faces enormous costs from the earthquake. Not only its own uninsured losses but the need to step in with a far more comprehensive income support scheme than it provided last time. We cannot expect businesses closed by the quake to keep paying their staff and we can’t let them go bust because that will undermine the economic foundations of the rebuild. Likewise, we can’t leave Christchurch families destitute. The government will need to step in and pay a good portion of those wages.

The good news is that the ratings agency Moody’s has said that our credit rating is not under threat because the Crown’s debt is low compared to other Aaa rated countries. Nonetheless, it’s idle to think we should finance this recovery from more borrowing, heaping the cost on our children. Many households’ balance sheets are also stretched and are becoming worse due the double-dip recession, which now looks set to extend to the middle of the year before the small and temporary boost from the Rugby World Cup. There’s only one sector of the community with the cash to front up with, and that’s the people who have received massive tax cuts under National.

I would suggest the government, when Parliament resumes in March, moves to pass tax legislation instituting a one-year income levy of 1% on incomes over $50,000, 3% on incomes over $100,000 and 6% on incomes over $200,000. That would only partially undo the splurge of unsustainable tax cuts in the last three years and would raise on the order of $600 million. The coming reduction in the corporate tax rate to 28% should also be scrapped, raising another $400 million. That $1 billion raised is $3,000 a head for the Christchurch population, which is a start, especially assuming many won’t need government assistance.

Reprioritising spending
The government is spending $680 million this year on new state highways and state highway renewals (that’s separate from the state highway maintenance bill). Many of these projects have benefits that the New Zealand Transport Agency calculates are less than or barely more than their cost. And even those projected benefits are premised on growing state highway traffic and low oil prices when, in reality, state highway traffic has declined to 2005 levels and oil prices are through the roof. Let’s stop wasting money on these white elephants and put the money into Christchurch.

A clean slate
I think that this shock, and the oil shock that’s also happening but we’ve hardly had a chance to look at, on top of the double-dip recession gives all political parties the chance to go back to the drawing board. Vague promises of ‘boosting growth’ aren’t going to cut it, real economic planning is needed. National should drop its asset sale idea, even if you believe their spin it’s overly complex tinkering for no guaranteed results (and we actually know it’s a backwards step aimed at enriching the rich). Likewise, Labour should drop its tax policy. Now’s not the time for slicing a tiny sliver off one group’s income and giving it to another. A successful economic policy now has the government taking an active role as planner and major investor in the economy, shaping the economy itself, rather than trying to play around with market forces to influence the decisions of the private sector. The private sector in Christchurch is wrecked, the government needs to step in, just as it has in the immediate disaster response phase.