We received this guest post about half an hour after John Key announced his cycleway. At the time, the very sensible criticisms it raises were ignored by an enamoured media. How prescient it looks now, on the anniversary of the Prime Minister’s Jobs Summit.

According to Stuff: “Another idea on the table [at the Jobs Summit] is a $50 million cycleway built the length of the country. It would provide 3700 jobs and would take two years to build. The government is keen on it for its tourist potential.”

A summit attendee writes:
“Oh dear. Less than four months in and the National Government is already bereft of ideas. How to solve unemployment? Let’s build a $50m cycleway the length of New Zealand! Whoopee! Somehow, we’re going to build this thing for just $25k per kilometre! Somehow, we’re going to expect that a $50m investment – just $12 per New Zealander – is just the boost that this country needs to arrest the slide towards high unemployment levels and a deeper recession! And over the two-year course of this project, if the workers received the entirety of the $50m in their pockets, they’d get paid $6756 per annum for all their hard work and toil! Oh, how in ten years time we’re going to be swimming in gold coins like Uncle Scrooge, crying ‘Mercy, it was that blessed cycleway that was the turning point!’

I realise this is just an idea at this stage. But it’s not even a half baked idea. It’s one of those demented ideas that crosses your mind during a daydream then you keep your mouth shut when you realise that whichever way you look at it, everyone’s gonna think you’re either unbelievably stupid or that you must be joking.

And there you have your answer. It IS a joke. The media who reported it clearly have no sense of humour or irony. Not even a subtle one. After all, National building a cycleway? You’ve got to be joking. They’d rather invest $50m on a rat and stoat breeding programme in the Karori Wildlife sanctuary. Actually, best not give them ideas….” 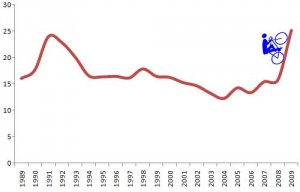 The number of jobless Kiwis is now 80,000 higher than when Key entered office. 250,000 people are out of work. The cycleway was reduced to a series of ‘great rides’ (which, frankly, always put me more in mind of sex tourism than cycle holidays). Just $3 million of the $50 million has been allocated. To a cycleway that was being built anyway. No jobs have been created as a result of John Key’s cycleway apart from a couple of public servants administering the money.