On Friday 27 July 2018, Wellington Tramways Union Vice President Chris Morley passed away after a short battle with Cancer, aged 62. Chris had been a Wellington bus driver since 1978, when public transport in the city was run and controlled by Wellington City Council.

In 2008 I was privileged to be elected to the Tramways Union executive with Chris Morley and Kevin O’Sullivan. Chris was one of the hardest working and dedicated union leaders you could wish to work with. He was also a good friend, who had always had my back. 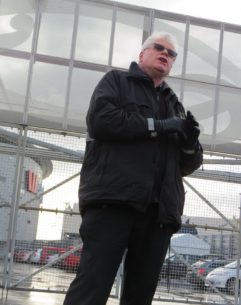 Chris Morley, Vice-President of the Wellington Tramways Union, addressing a protest rally outside a Greater Wellington Regional Council meeting 28 June 2017. Chris told those present drivers would not accept cuts to their pay and conditions.

I made the following video tribute for Chris when he passed away.

Chris wrote for The Standard in 2017, in two articles defending Wellington’s Trolley Bus network and arguing that light rail was not a suitable alternative to Trollies in the Capital:

Wellington’s Trolley Buses – why they should stay

The Wellington Tramways Union have been at the vanguard of resistance to Neo Liberalism and attacks on public transport and workers rights since the 1980s. As I summarised in an earlier Standard Post when public transport was deregulated in the late 1980s and privatised in the early 1990s, the union held on to penalty rates and other valuable conditions from the old Tramways Union Award. Penalty rates meant drivers received time and a half for working over 8 hours and for working Saturdays, and double time for working Sunday’s. To quote Chris, these conditions allowed drivers control over what they worked, when they worked it and how they worked it. Drivers were given transport to work when they started or finished at unsociable hours when transport wasn’t running. In exchange for keeping these conditions Wellington bus drivers took a $1 an hour pay cut in 1991, but retained greater weekly earnings to bus drivers in other NZ cities where they gave away penalty rates and transport agreements for a higher hourly rate (a lesson for all unionists about the importance of conditions).

The Wellington Tramways Union held on to these conditions by remaining fully unionised, and by fighting off attempts to remove penalty rates by the employer and the Greater Wellington Regional Council (GWRC). Another reason these conditions were defended, was that the trolley bus network (the last remaining network in Australasia, though still common to see in Europe and other parts of the world) gave the Wellington bus company a monopoly. This made it difficult for competitors to take work off Stagecoach and later NZ Bus, by undercutting on price during tendering then paying drivers less to pay for it.

The decision by GWRC in 2016 to remove the Trolley network, was to allow competitors into the Wellington bus network. Competition would drive drivers conditions and would be cheaper for council – which was the true motivation of Chris Laidlaw, Paul Swain, Wayne Hastie and co at GWRC.

Chris Morley fought to the very last days of his life to defend both the Trolley Bus network and drivers pay, conditions and jobs. In one of his last conversations to me he said the stress of the last couple of years had likely contributed to him getting cancer. Chris’s career as a Wellington bus driver ended in July 2018, Chris being made redundant just days before he died.

Chris was a hero of the Trade Union movement, who fought for workers rights till his final breath. The greatest tribute we can pay to Chris is to stop the attacks by GWRC and Tranzit on drivers conditions of employment. To find out more visit the Thank You Driver page and support the campaign Chris worked so hard for throughout his life. RIP Chris.

*Nick Kelly is part of the Thank You Driver campaign. Nick was President of the Wellington Tramways Union from 2008 to 2012. He was also PSA’s Local Government National Organiser 2013 to 2015, and is now a director at Piko Consulting living and working in London.