Which minister will John Key fire this week?

Bill ‘Double Dipton’ English, who is embroiled in yet another personal corruption scandal following the revelations on his housing expenses in 2009 and the PEDA money in 2010. This time for an unadvertised, big-money contracting job has been handed to his brother Mervyn to set up the mysterious new ‘Health Sector Forum’, which looks like a stalking horse to get more publicly-funded work handed to private providers. As a one-off, the Finance Minister’s brother being given a high paying job in the public sector that wasn’t advertised would look dodgy. With English’s form, it looks like blatant corruption. 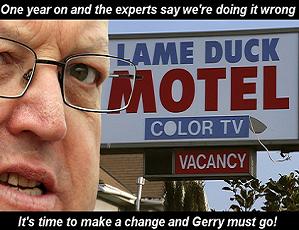 Gerry ‘The VIIIth’ Brownlee’s fiefdom in Christchurch is seeing a peasants’ revolt. Many red zone people are saying they will not accept the government’s inadequate offer for their properties. Option 1 (2007 RV) will not get people a replacement property and will leave people tens of thousands, in some cases hundreds of thousands out of pocket, after Brownlee and Key promised to protect them. Option 2 (government buys land, insurer pays replacement) is a no go because the insurers won’t pay replacement on red zone houses, even ones they had previously called write-offs. Homeowners are allowed to appeal their home’s categorisation in theory but Brownlee is denying them the geotech data with which to do it. Three hundred redzoners turned out to a protest yesterday. Brownlee has no plan on what to do with people who refuse to leave the redzone, including the 50-odd uninsured households who have received no offer from the government. He seems to think he can simply bully people. It’s not working. He needs to go.

Murray ‘drowned rat’ McCully delivered Key a huge embarrassment on Friday. Just hours after Key skited that critics of his ‘party central’ would be eating their words, people were jumping into the sea to escape the crush on the wharf while thousands of ticket holders missed the opening ceremony in the transport chaos. As Duncan Garner says, heads should be rolling. McCully was the point-man on sorting this. Steven Joyce also has responsibility for not putting enough into public transport over the past 3 years and wasting it on motorways instead. As does Rodney Hide, who took transport out of the democratic control of the Council. But, as the Dom says, the buck stops with McCully. He refused to offer an apology on Saturday.  McCully ought to be tendering his resignation within the week.

So, who will go? Will Key have the guts, and the principles, to sweep away all three of these yesterday’s men?