As I said last week, the polls that came out this weekend can not reflect any impact of the secret agenda tapes. The Roy Morgan poll was 50% over before the first tape even came out, and remember it was not until mid-week that the story was really big. Similarly, the Fairfax poll was mostly conducted while the story was still emerging (Colmar Brunton have not provided any period for their poll). On top of that, a wealth of experience and scientific study shows that it takes time for a political event to flow through into poll results. That, of course, did not stop any of the coverage from concluding that the tapes had either had a significant effect or no effect, depending on the contradictory movements of parties in the three polls.

And the polls do contradict each other quite strongly. Take a look at the range of results each party secured in the polls. The range of results is surprisingly high, higher than one would normally expect due to statistical variance; perhaps some one or more of the polls have methodological issues. 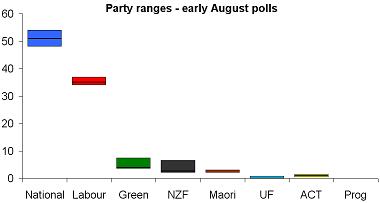 Nearly every party were up in one or two polls and down in the remainder. Labour will be heartened to have moved up in 2 of the polls (including an 8% gain in the last two Colmar Brunton polls) and recorded no change in the third. The Greens polled under 5% in two of the three polls, but nobody seriously expects that they won’t win 5% on election day.

Interestingly, the TV3 poll that Duncan Garner mentioned in his blog last week did not materialise on Sunday. Presumably, it was pushed because of the Olympic coverage and will be out tonight. If they, unlike TV1, decided the poll shouldn’t be drowned out by the Olympics that could mean it will make interesting reading. But, of course, it cannot possibly reflect the impact of the secret agenda tapes.

[both major parties’ internal polls show the gap narrowing, about 4-5%, not sure what the period of those polls was.]

37 comments on “Reviewing the weekend polls ”