I was pleased to see this excellent write up in the Otago Daily Times of how The Longwood Loop is getting on. The brain child of Riverton food foresters and heirloom orchard pioneers, Robyn and Robert Guyton, the Longwood Loop is a regenerative project that connects up local food growers with local food buyers in rural Western Southland. 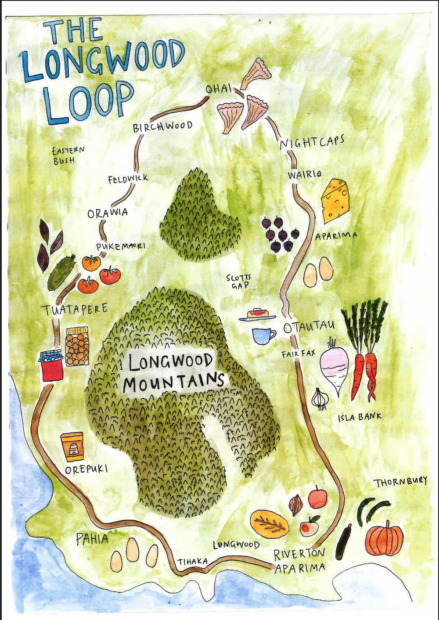 Much of what gets written on The Standard, including by myself, is Holding Patterns writing. We’re writing pushback against National, or how Labour need to change, or what’s wrong with the damn world and how that should be resisted.

I can say that the posts I put up about the Longwood Loop fundraiser earlier in the year, are among the most satisfying posts I’ve written, because they were about Alternative Structures and Shifting Consciousness. And people on the ground, getting shit done. We watched real change arrive in real time as the fundraiser made it over the line.

This is what the Longwood Loop is. It’s a leading edge project that is creating an alternative food distribution structure that is functional now, as well as being replicable elsewhere. It draws on philosophies that are changing how we think about food production and resilience, and the economy. I was very excited to read how things are going.

But every Thursday afternoon, an electric van can be seen going against the grain, humming along in near silence.

Its driver, Robyn Guyton, is on a mission: to revitalise an old trading route and foster community in the process.

In the boot of her 2021 LDV eDeliver 3 are boxes of vegetables, fruit and meat – plus a chocolate and raspberry muffin for one lucky Nightcaps local.

Together with a group of volunteers, Guyton has set up The Longwood Loop – a mobile farmers’ market connecting emerging producers in Western Southland with their community.

Each Thursday, she drives an ever-changing 150km-220km path that starts and ends in Riverton, picking up and redistributing fresh produce along the way.

“It’s an online farmers market [where] the growers put up how much they’ve got, into the website,” Guyton explains.

“Then on Monday, the shop’s open and for three days people can order, and the growers know exactly how many lettuces to pick.

The shape of the loop varies from week to week depending on where orders are placed, but follows the same general path.

“It’s not like a normal farmers’ market where you might have 50 lettuces and you might sell 20. So there’s no food waste. It’s same-day [delivery] so there’s no overnight storage needed. And it’s carbon-free travel.”

Buyers can order as little or as much as they want, and now 14 runs in, about 80 of the 200 registered customers have done just that.

At the first stop between Riverton and Ōtautau, she drops off an empty chilly bin from last week’s run and collects meat, hazelnuts and 10kg of blueberries. And so it goes.

The Longwood Loop is also pushing political boundaries. The politics of food relocalisation and small scale regenerative agriculture/horticulture aren’t talked about much on the left but this is a good snippet of the creative and progressive meeting the rigidity of the conventional,

Even after the vehicle was purchased, Guyton says, the project was put in jeopardy by the Southland District Council, which raised concerns growers should be registered with the Ministry for Primary Industries.

Guyton says she was going to do it anyway.

“I was prepared to get arrested for it,” she recalls enthusiastically.

“Nobody’s going to die off food that’s picked up and dropped off the same afternoon.”

Key here is the resilience politics of greenies, transitioners, DIYers and anarchists, where we just don’t wait for the government to act, we get on with and build the new ways ourselves. Then the centre will follow. This is how change happens, and it’s one of the more heartening aspects of the climate and ecology crises. All over New Zealand people like the Guytons have forged ahead with exactly the models we need in a post-carbon, life affirming, climate change world.