Right plans give away to rich at your expense

Part of the National/ACT government’s agreement is that a top tax rate of 30% will be the target for the ‘medium term’. Such a cut would cost about $2 billion a year.

Now, I have nothing in principle against reducing tax (and nothing in principle against increasing it, for that matter). It’s a question of trade-offs, which is greater benefit: the services the tax could pay for or the tax cuts, and who gets those benefits? $2 billion a year, that’s a lot of hip operations, so it’s worth asking who would benefit from replacing Labour’s legislated tax cuts with National’s current programme and a 30% top rate added to it (ie. 30% top rate kicks in at $50,000).

Hmm, maybe it will look less like pillaging ordinary Kiwis’ social wage to give the rich a bonanza if we do it in graphical form. 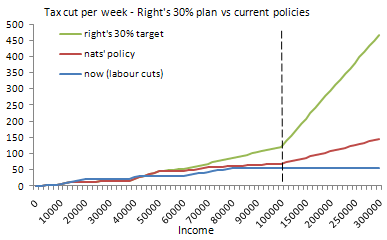 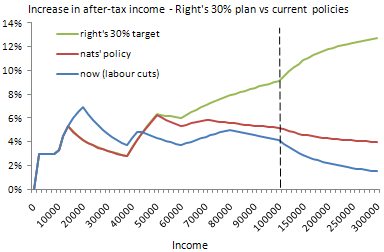 $2 billion a year either coming out of public services or paid for by more debt to pay for massive tax cuts to the already very well-off. It would be ordinary Kiwis who would ultimately pay for this extravagant gift to the rich. Doesn’t seem to me that Mr Moderate has the mandate for that.