People trying to smuggle themselves across borders or seas in shipping containers often die. We know this. And I’m not trying to compare what follows to the deliberate killing of hundreds or thousands of prisoners in Afghanistan by way of “transporting” them in container trucks. But to be blatantly honest, it was memories of seeing men herded into shipping containers from that time that jumped immediately to mind when I read of the prisoner conditions at Wellington’s Rimutaka Prison. (link)

What is this country that we live in? 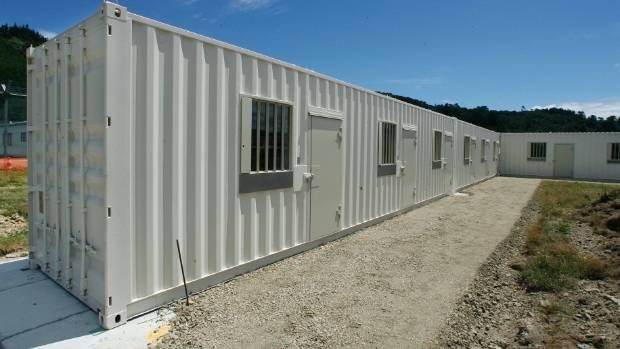 Unventilated metal shipping containers that have been untilised as cells since 2010, and a Corrections Dept blowing the whole thing off because the 73 prisoners held in those conditions are outside until 5 p.m.?!

To hell with being outside in this weather! How much shade is there in a prison complex? Well known for their verdant leafy shadows, are they? (Hint: that’s an aerial shot of Rimutaka Prison used on the front of the post).

National commissioner of Corrections Jeanette Burns said a heat management plan was in place across the country, and prisoners in the container unit at Rimutaka – the only of its kind in the country – were being provided with cold and frozen water, as well as fans.

“We are working on interim solutions to reduce the discomfort caused by the heat, while ensuring that safety and security are not compromised,” she said.

So, what’s this “safety” she speaks of? Obviously not that of the prisoners. And how in the hell can Kelvin Davis, according to “Stuff” say he has “yet to form a view” because he hasn’t visited Rimutaka?

On that note, I’m sorry for submitting a post that no-one can comment on, because, y’know, unless you have been in Rimutaka Prison it’s obviously just not possible for you to form an opinion or have a view on men being held in metal containers.

Update/edit – The following photos aer of the completed prison block. Stuff had used a photo from the construction phase. Can’t say I’m impressed by that. (h/t Joe90).