Well, the Government’s managed to set another record: 3300 Kiwis have managed to ‘catch up’ with Australia in a month. 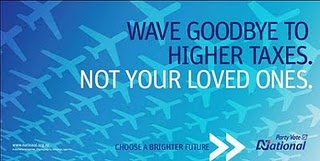 That’s the new record for number of Kiwis leaving for Australia, set in May.  The previous record of 2900 was set in 1979.

Why are people leaving?  In despair at the lack of vision and economic plan of John Key’s government.  Because they see a better life in Australia, with higher wages and more opportunities.

I was fortunate enough to hear Rod Oram speak earlier this week.  He described the last budget as the worst of the 15 he has scrutinised closely since arriving in the country.

Why? Many reasons (over-promise & under-deliver, over-stating public debt problem, over-reliance on over-optimistic Treasury forecasts etc), but the biggy was the lack of forward-thinking.  There was no investment or plan for the future.  We need R&D and tertiary investment to grow the skills and ideas to increase our country’s wealth and generate the higher income, better jobs Kiwis want: both were cut in real terms.  There was no way out of the mire.

And that’s what the flood of Kiwis jumping the ditch see: no hope here.

We deserve better – a government with a plan at the very least.

55 comments on “River of Kiwis now flood to Oz”