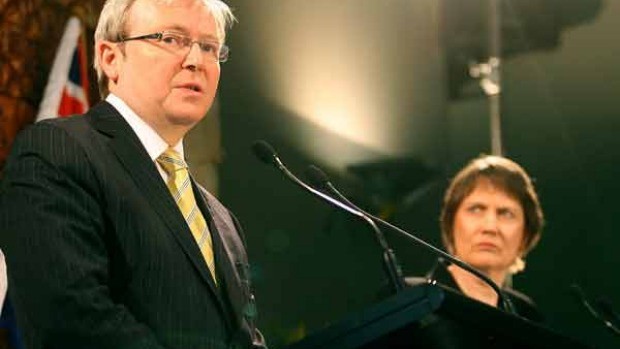 Her prospects must be pretty good.  Her commitment and credentials are impeccable.  And the organisation has suggested that it is time for the next leader to be the first to be a woman.

Others are also rumoured to be seeking the position. Bulgarian head of UNESCO Irina Bokova is expected to be a strong candidate. And she fulfils two desirable characteristics, she is a woman and she is from the Eastern Block. It is thought it is time for this region to supply a secretary general so she appears to have the inside running at this stage.

But wait there is another candidate who hopes to continue at the UN what he started at the Australian Labor Party. Yes Kevin Rudd of Kevin 07 fame wants to be the next UNDP. What could go wrong with him at the helm?

If you want to get a flavour of how spectacularly appalling Kevin’s reign as Aussie PM was then ex Midnight Oil singer and Labor frontbencher and former Rudd supporter Peter Garrett provides it. A recent Guardian article contains the following passage:

Garrett says in the book that supporting Rudd in light of his “trail of destruction and abandoned policy” was his biggest mistake in nearly 10 years in parliament.

“Rudd wasn’t someone who was easy to work with in that way, and his vanity and his exercise of power as prime minister was contrary ultimately, to me, to what good leadership is.”

Rudd was not fit to be Prime Minister and his removal as PM was because of this.  Did he then choose to accept the wisdom of the majority of caucus and work for the common good?  Nope, he set out to destabilise and destroy Julia Gillard’s tenure as PM and the Labor Government with the fantasist thought that he could do this, regain the leadership and again lead Labor to victory even though his actions so hopelessly compromised Labor that defeat was inevitable.

Regular Radio New Zealand commentator and former Labor staffer and Ministerial Public Relations advisor Kerry-Anne Walsh has written a book, the stalking of Julia Gillard, on what then happened.  She has this no holds barred acerbic style of writing which must have been rigorously checked by the lawyers because it is so condemning of Rudd it must have tiptoed up to the edge of what is safe.

She starts off by talking about “Team Rudd’s slow-death destabilisation campaign against Gillard” and highlights Team Rudd’s use of the media by “unnamed sources” to continuously present Gillard in a negative way.  Rudd’s use of the media as a pliant assassination tool is detailed in excruciating passage after excruciating passage.  Like this one:

The Herald-Sun’s Gillard hater-in-residence, Andrew Bolt, kicks off the media sledge-fest with a column on 15 June declaring her the weakest and most incompetent prime minister since ‘at least WWII, with not a single achievement to boast of in a junkyard of failure’. Hers is a ‘shameful record of deceits’ that ‘makes her unelectable’ and, just to make sure we get the message, he finishes: ‘What’s killed Gillard is simply a lack of character. Of gravitas. Of honesty. Dud policy can be fixed. But dud character cannot, and Gillard’s tragedy is that hers has been found out.’ By whom, he doesn’t say.

Walsh’s disdain for Rudd is evident from passages like this one:

Rudd, who on this chill June night has just martyred himself by participating in the annual Vinnies CEO sleep-out, emerges remarkably quickly once the newspapers have hit the newsstands in order to talk to ABC Breakfast. He’s decked out in a humble blue and white tracksuit and sporting a wee hint of homeless stubble.

Rudd’s is a cynical, corrosive ambition that is eating the life out of the government, rocking the wheels off parliament and serving nothing other than the need to fulfil one man’s vengeful ambition. Why is this not being written?

Back on that strange planet where Ruddspeak is the art of saying one thing while thinking or doing another.

And clearly Australian media’s coverage of politics is similar to New Zealand media’s.

Political journalism is now a game of Gotcha—a hunt for that hint of weakness, the slight intonation or nuancing of words that might indicate something isn’t kosher. It’s a witch-hunt out of control, where the slightest stumble is magnified to ridiculous proportions, often into stories of national status, when they’re in fact based on fluff.

Successive claims that Rudd had the numbers to defeat Gillard were, shall we say, optimistic although eventually she was defeated by the incessant and continuous attacks from within.

This makes you wonder about Rudd’s statement that he is not a candidate and that it is Eastern Europe’s turn.  To highlight the sense of unease media speculation that the United States would support a Rudd candidacy bring on a strong feeling of deja vu.

Helen would be a superb candidate.  But if Kevin Rudd is true to form expect tactics to be used which should clearly display that he is not suitable to lead the United Nations.