Statements made in Parliament last year, in chronological order:

Hon BILL ENGLISH: What I can confirm is that Australian unemployment is consistently higher than New Zealand’s, and its Budget deficit forecasts are higher than recent forecasts I have seen from New Zealand. So whatever we are doing, it seems to be working better than what Australia is doing.

Hon BILL ENGLISH: I think that, with typical Kiwi understatement, we will probably use less extravagant terms than the Australians, and we will achieve better results.

Hon JOHN KEY: I do know that New Zealand’s unemployment rate is 5%, and we can contrast that with the rate in Australia, which is 5.7%… I do know that on this side of the House we care about jobs.

Hon PAULA BENNETT: Compared with similar countries our employment figures are holding up quite well. On the official household labour force survey our unemployment level is at 5%, while that of Australia is at 5.4%

Hon BILL ENGLISH (Minister of Finance): For most people, the measure of a recession is whether they have a job as much as it is a measure of changes in GDP. New Zealand’s unemployment rate compares very favourably with Australia at 5.7%.

Hon BILL ENGLISH (Minister of Finance):  ..in New Zealand it is 5%, which is why it is intriguing that the Opposition finance spokesman should be telling us to copy Australia, whose unemployment is higher than ours at 5.7%.

Hon STEVEN JOYCE: I say to Mr Hughes that we can compare our unemployment rate with Australia’s

Hon Annette King: Does he stand by his statement that the Government’s policies are taking the sharp edges off the recession, when the figures released today from the household labour force survey show that unemployment is now 6%, which is higher than Australia’s unemployment rate; that it is the biggest quarterly jump in 21 years, up by 20.6%; that it is the highest unemployment rate in 10 years; and that the number of long-term unemployed has more than doubled, and does that not show that rather than taking the sharp edge off the recession, this Government’s inaction is slicing through families through its lack of policies around unemployment?

MOANA MACKEY (Labour): It is deeply concerning to the Opposition that the Government seems to be so economically illiterate. Members of the Government seem to have genuinely convinced themselves that somehow they are responsible for the fact that our unemployment is not as high as in the UK or in the USA. They stopped talking about Australia, because for the first time in 20 years Australia’s unemployment is lower than New Zealand’s unemployment, on their watch. So they do not talk about Australia any more. But they genuinely seem to think it was all their own work, despite the fact that they inherited from the previous Labour Government one of the lowest unemployment rates in the OECD. 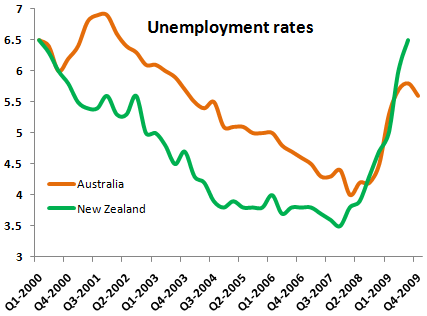 You can see that when the ministers were making their statements, unemployment here was already higher than in Australia. The data comes out here slower than it does in Aussie (which updates its stats monthly, not quarterly). The ministers were taking an information deficit and congratulating themselves on success.