Robert Krausz looks at the latest scheme for another sell-off of wilderness access with consultation limited to ‘inner circle’, while public input left out
While DOC and the Government sit mysteriously on a long-delayed decision about the fate of one developer’s shortcut tunnel that would undermine the Routeburn Track, and another developer’s attempt to run a monorail bringing Queenstown tourists to their poorly-located hotel, an even older idea has reared its reworked/recycled head: the Haast-Hollyford Highway (HHH), which would provide a more direct link between the West Coast and Fiordland.
After all of the public debate about the tunnel and monorail proposals, the Haast-Hollyford Highway must appear to many as an obvious compromise solution – one that could serve to appease both environmental and economic concerns in the region.  However, upon closer inspection the HHH raises as many new questions as the old ones it might appear to answer – at least in the form in which it is being pitched.
The principal advantage of the HHH is obvious: it provides a much shorter route between the West Coast and Fiordland.  It also represents a way for travellers between these two regions to totally bypass Queenstown – a ‘screw you’ rebuttal of sorts to the tunnel and monorail schemes that would divert Queenstown tourists away from Te Anau and other Fiordland centres, on their way to ticking their Milford Sound ‘been there, done that’ boxes. 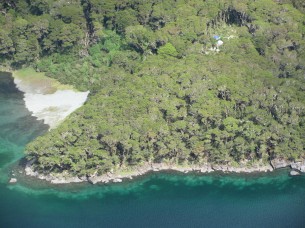 The obvious downside, which the media seems to have picked up on, is that the HHH would represent yet another subtraction from New Zealand’s wilderness estate – as the road would slice its way through some of the country’s most remote and rugged terrain, and would also effectively divide Fiordland National Park into two separate pieces.

What has been surprisingly missing from the discourse is debate about the private enterprise nature of the proposal.  As noted in the media, such as in this article in the Otago Daily Times, the HHH would be financed to the tune of around $220 million from overseas sources, which the proponent Westland District Property Ltd will not reveal at this time because of “very, very strict confidentiality agreements.”  This would make the HHH something largely unprecedented in NZ transportation: a private toll road.  The proponent is suggesting a $20/head road toll – which would presumably provide the payoff for the private partners and their overseas financiers.  Another presumably ‘sweet deal for mates’ – all in line with the new reality of business-as-usual in Aotearoa.
As with the as-yet-undecided tunnel and monorail proposals, this raises the question of whether Zealand is moving in the direction of selling its most public and protected land to private developers, for their private profit-generating schemes.
The HHH proponent has announced an upcoming trip that might include stops in Queenstown, Te Anau and Invercargill from 12-14 December.  The stated purpose of the trip is to brief as many “key stakeholders” with a “significant interest” as possible.  Of note: this will include “no public meetings”, as per the words of the proponent.
Cue the red flags and alarm bells…
Robert Krausz