Send gummy bears to your representatives

Last night Lyn was regaling me with an advertisement on amazon for a 5 pound bag of “Haribo Classic Sugar Free Gummy Bears” with its 643 product evaluations. In this fine example of online consumerism, all appeared to agree that these really were some of the tastiest snacks around. In fact they were so good that many were suggesting that they got sent to all members of congress.

Just read some of these raving reviews.

Such a kind thought… Perhaps it would be worth sending them to parliament? 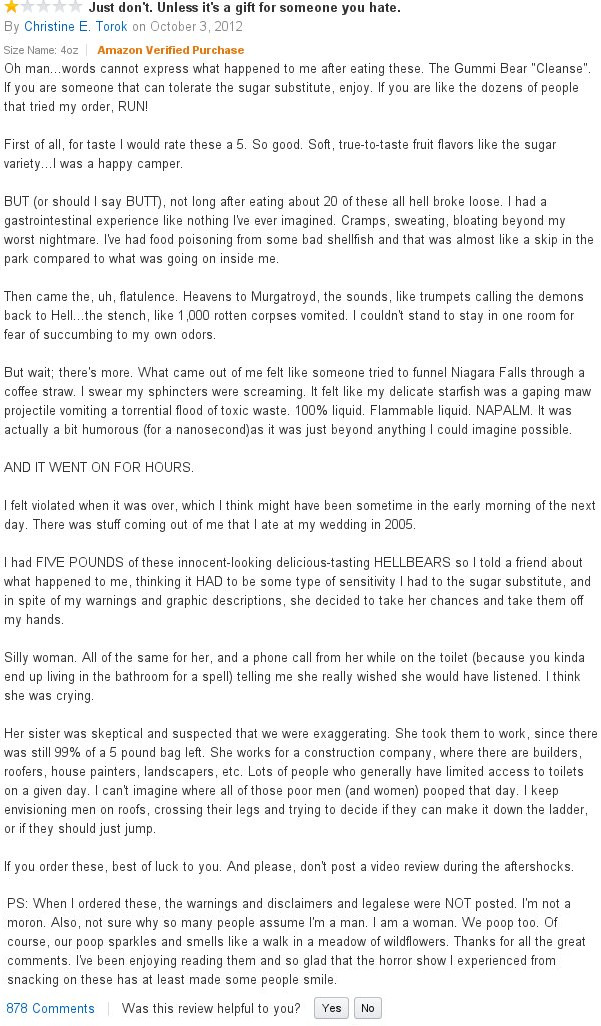 Ouch. But I can sympathise with the urge to share this opinion about the product. I have the same explosive purges in one form or another whenever I ingest anything with Maltitol as a sweetener. Which is why I strongly support the full labelling of all food products – preferably on the front. So lets have a look at the ingredient list..

What are most of these? I don’t know. But read this safety warning.

Safety Warning
Consumption of some sugar-free candies may cause stomach discomfort and/or a laxative effect.  Individual tolerance will vary.  If this is the first time you’ve tried these candies, we recommend beginning with one-fourth of a serving size or less. Made with Lycasin, a sugar alcohol. As with other sugar alcohols, people sensitive to this substance may experience upset stomachs.

But in particular what in the hell is Lycasin?

Lycasin is a trade name given by Roquette for hydrogenated glucose syrup (hydrolysed starch).[1] One of the major components of Lycasin is maltitol, …

My nemesis – bloody maltitol hidden under some half-arsed trade name

Something as lethal to my work life (and that of those around me) as maltitol isn’t required to be listed as a potential problem in NZ unless it is more than 10% of any product by weight – a level that can be medically dangerous to many people.

I know from inadvertent experimentation that I react to it at well below that level. Some products have it listed in the ingredient list down to 5% by weight. I react badly to it at that level. But it is also in a number of products that merely label it as a “sweetener”. The solution is better food labelling and screw the producers and importers.

But no, I think that tormenting our elected representatives should never be done with sweeteners. Talk to them instead. That is what they are there for – especially in election year.  Do give them a rocket up their collective arses about food safety and labelling this election. Better still, if you have a problem with unlabelled sweeteners or whatever, buy the local equivalent of gummy bears before you see them.

25 comments on “Send gummy bears to your representatives ”