The government is vulnerable around the Paid Parental Leave Bill.  They don’t want it to pass, but they risk losing support from women for not supporting it.  A financial veto of an entire Bill has never been done before, and it’s experimental for the government. There are certain clear rules around excercising the right of veto, but there also seems to be some uncertainty around specific procedures.

Last night I went to the public meeting in Auckland about Sue Moroney’s Extension of Paid Parental Leave bill. As I indicated in an earlier post an extension to PPL is good for children, parents, families, employees, employers, the community, society, education, health and crime prevention. 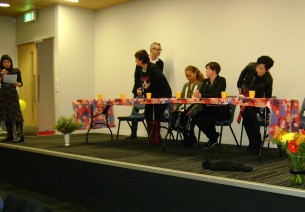 According to Sue Moroney nation-wide polling on voting intentions, conducted after her Bill was drawn from the ballot, showed a drop in women’s support for the National Party. The night the Bill had its first reading, government MP’s were viciously aggressive  in the parliamentary debate.  It was the night that the government lost a vote for the first time in 4 years. Some National Party women have privately expressed support for the Bill. It’s thought that some women in the government’s caucus are very uneasy about their party not supporting it.

The government’s threatened veto is by no means a foregone conclusion.  The day the Bill went to select committee, Bill English changed his argument against it. The committee is where the Bill and its costings get thoroughly scrutinised.  So once English’s dodgy figures were going to get shown up, he shifted the reason for opposing it from claiming it’s unaffordable, to “It’s not our top priority…”.  Now the challenge is to provide convincing arguments for extended PPL being a priority.

Tim Hazeldine is an economist after my own heart.  He said he didn’t need to do financial costings to decide that he supports the Bill.  He supports it because it’s the right thing to do. Women have babies, and that has natural consequences; large numbers of women now work in the paid employment.  When it’s right to do something, then a government needs to find a way of funding it.

Hazeldine also put forward some challenges that supporters of the Bill need to be prepared to counter. What will need to lose funding to make way for this Bill?  RONS?  What about unintended  consequences?  More people having babies in an already over-populated world?  However, it’s more likely that the Bill will result in lower birth rates due to it enabling better family planning? Should Boomers like Hazeldine pay for PPL through raising the super age? What about beneficiaries?  They also need financial support, but it doesn’t need to be at the expense of PPL. Supporters of the Bill should not allow themselves to be pitted against other high priority policies and people.

Moroney also said that the Bill has yet to be fully costed, including the benefits and trade-offs that will bring the costs down: e.g. women staying at home to look after their children, means they won’t be using tax payer funding for child care; when an unemployed person is employed to cover parental leave, that’s a little less money WINZ needs to pay out.  And then there’s the long term financial and economic benefits to society in having children growing up well-adjusted, healthy and well-cared for.

Business NZ’s submission comes before the committee today, and it should be worth watching for media reaction. After reading it, Moroney had to check the date on her phone to reassure herself she was not in an earlier century – it could have been written by Alisdair Thompson. (Interview on Breakfast TV One 18 October, with Business NZ CEO Phil O’Reilly).

Note: now it’s “not a top priority” due to current economic conditions, but the Nats opposed the original PPL Bill in 2002 in good economic times. Sue Moroney says she drafted the Bill in 2009, and that it reflects the fiscally-challenged times.