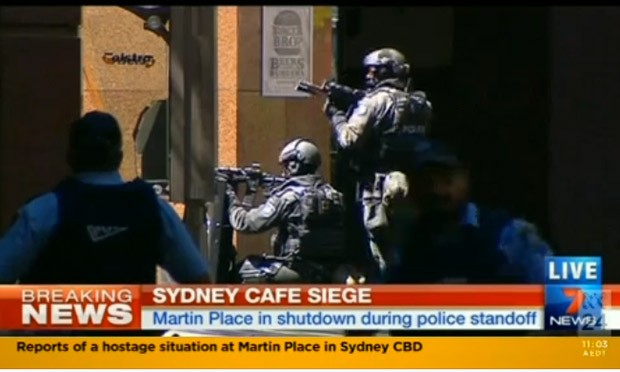 In a breaking story there are reports of possibly two gunmen and up to 20 hostages being held in the Lindt Chocolate shop on Martin Place in downtown Sydney.  The Guardian has reported that an Islamist Flag has been placed in the window of the shop.  From the Guardian:

Michael Safi reports the flag in the cafe window appears to bear the Shahada “There is no god but the God, Muhammad is the messenger of God.” It is not the Islamic State flag.

The flag that hostages appear to have been forced to hold up in the window of the Lindt Cafe in Martin Place is not the Islamic State flag – but that isn’t to say that Isis is not involved in today’s incident.

The flag appears to bear the Shahada, an Islamic creed which reads: “There is no god but the God, Muhammad is the messenger of God.”

It’s a perfectly benign symbol and appears across the Islamic world, including on the Saudi Arabian flag. But it has also been embraced by jihadi groups such as Jabhat Al-Nusra, an Al-Qaeda affiliate currently fighting in Syria.

The Herald is reporting that the siege started after a 25-year-old suspect was arrested in an earlier terror raid in Sydney this morning.  Officials have also evacuated the Opera House after reports of a suspicious device being found.  The hostage takers allegedly want to talk to Tony Abbott on air.  I am not sure why.

Update:  The Guardian has a continuously updated news feed.

Update2:  Tau Henare is being a dick on Twitter …

#Punishment for #ISIS crap. you and your family, mum and dad, sisters and brothers will be deported back to where ever you came from. #EoS

Update: The siege is over, reports suggest two dead and three injured.