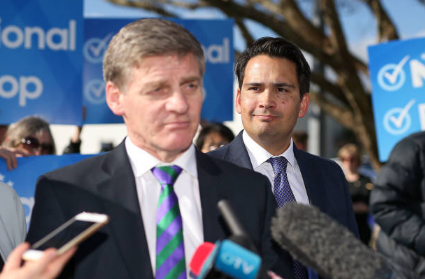 Simon has now been leader of the opposition for six months.

How has he been going?

Not very well I am pleased to say.

Perhaps it is an indication of how well Aotearoa New Zealand is being run currently.

The really big issues, homelessness, child poverty, climate change are being addressed and being addressed properly.  There are no major chinks in the Government’s armour for Simon to make hay on.  Apart from elements of the Business Community people are pretty happy and looking to the future.

Simon has responded by trotting out the usual stuff, and searching for issues that he thinks will make a difference.

But his judgment is pretty poor.  He thinks that beating up some sort of controversy over the early leak of information that would have come out anyway will give him an advantage.

He is fixated on who released embarrassing information about him three days before it would have actually been released.

I have struggled for a while to understand why Bridges thinks he is on a winner with this issue and why he has continued to attack Trevor Mallard and Labour over the issue.   Richard Harman (thanks Neale Jones) may have discovered why.

National’s leak problem may have become more intense although I should mention that Richard Harman has printed the following addition to his article:

(Bridges says this claim is false)

I bet he does.  Others stepping up and denying it would increase the validity of the claim.

If it did happen I can imagine a scene where Simon fixed Mallard with his lawyer’s eye and determined conclusively that he was lying.

If only the practice of law was so simple.

The weakness of the claim is that there may have been an awkward interaction between the two but Mallard lying was not necessarily the reason.  Mallard may have been thinking “you are an absolute tosser” and realising that in the interests of the proper functioning of Parliament he should hold that thought back.  That is not evidence Mallard was involved in the leak of the information.

And any good lawyer knows that you should always reassess your hypothesis against new information that may appears.

So when texts arrive from someone claiming to have been at National Party caucus meetings saying they are from the leaker and they are proof that they are a National MP there are a few things you would do.

Firstly you would ascertain if the information was accurate.  If so there are three possiblities:

Of course if the information was not true then you shout this to the rooftops and state that National is being subject to a false flag operation.

But Gerry Brownlee gave it all away yesterday.  He said that the information about the caucus meeting came from gossip or hacking.  Ergo it must have been accurate.

The claim conjures all sorts of visions.  I bet National’s caucus room is being swept for bugs and hidden cameras as I type this.

What proof is there that Mallard or Parliamentary Services leaked it?  Mallard was that confident he was willing to call for a formal investigation.  If he was wrong and his office did actually leak the information this would have been the end of his role as speaker and probably his career.

Mallard noted early that the format of the released information meant that it could not have been Parliamentary Services.  I am sure he was right.

What are the chances of National being hacked?  I guess nothing is impossible although Labour learned a while ago that the best way to do politics was not to play games but to be straight up and authentic.

Or was it the collation of gossip?  Only if you believe that the National Caucus leaks like a sieve and I have thought its discipline over the past few years was pretty good.

What about the other possibility, that the leaker was a National MP or staffer.

Everything points to this.  Sensitive information being released in a format that was not Parliamentary Services format, an anonymous texter providing accurate evidence of what happened in caucus meetings as proof that they are a National MP?  The counter hypothesis that the leaker is a Parliamentary Services employee that has access to confidential information does not gel.

And what about the counter evidence?  All we have is the fact that the release occurred and Parliamentary Services may have been in possession of a different form of the information.  And Simon thought that Trevor was acting strangely.

It seems that every time someone mentions this Simon doubles down.  Perhaps I should continue with daily posts on the subject.

But this is like a whodunnit over a shoplifting case.  You have to wonder at Simon’s judgment to keep it going.

I am sure under the last Government it would have been different.  I bet the conclusions of the police investigation would have been provided to the relevant Minister quicker than you could say “no surprises” and the assault on the leaker’s character would have started.

So six months into Simon’s career and everyone is already questioning his judgment.  This is what they say in the business is not a good start.