Won an adjournment to a later date in tenancy tribunal this morning, there will not be an eviction today. #NikisEviction
We’ll be crossing live to #NikisEviction on The Wire today. Tune in.

This will give them the ability to forcibly evict Ioela ‘Niki’ Rauti who has lived at 14 Taniwha Street for 21 years.

To prevent bailiffs and police from evicting Niki on Tuesday, a sit-in by supporters will be held from 9am onwards at 14 Taniwha Street.

Niki is a former truck driver and chef. She originally moved into the former state house to care for her ill mother. Niki has a heart condition that is not going to change. She has said she does not want to be a transient tenant. Some families in Glen Innes have already been relocated twice since the redevelopment began.

TRC will not be building social or affordable houses on Niki’s section. Niki says, “These will be mansions, they are not for the ordinary person.”

TRC have offered her another house which is up several flights of stairs that she cannot climb.

Last week on the 17 January, a March to Occupy demonstration drew hundreds from the community and supporters from other parts of the city in support of Niki. Organisers of this sit-in intend to do the same on Tuesday and will oppose Niki’s eviction by any means necessary.

An occupation for the right to live in your own home is continuing in Glen Innes today. Niki has been in her state house for over 20 years and intends to stay there. A development company has issued an eviction notice which ran out last wednesday, we hear more from bFM reporter Lillian Hanly

You want to talk about the oppression of women, look at a 62-year-old who moved into a state home to look after her sick mum #NikisEviction

This is *theft*, people. Theft of Niki's house of 21 years. Theft of public land. Theft of our basic sense of community #NikisEviction 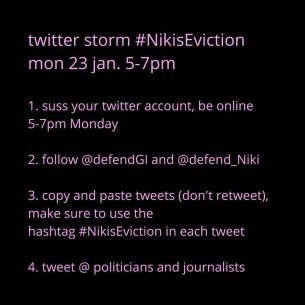 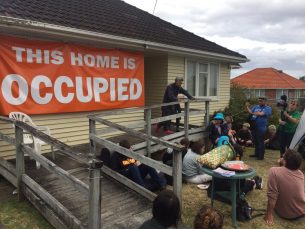