vto made a comment that he thought that the number of comments was diminishing at kiwiblog. Now I have no idea because I usually avoid the sewer that is the comments section there. However it did remind me that I should have a look at the last year or so here. It feels like it has been getting more popular, but intuition is a poor substitute for actually looking at the numbers.

So looking at the yearly picture for full years, our comments are rising in the last few years and our posts remain pretty constant, so our comments per post has been rising.

We have been keeping the numbers of posts limited because we’re not really that interested in burning out authors. We all have lives outside of the blogs, don’t want to spend our lives writing posts, and don’t really want to become some kind of news clipping service. You can see the election year effect in 2008 and 2011.

The question for this site in 2012 is if we keep similar numbers of the readers and commentators, and their page views and comments post election year. 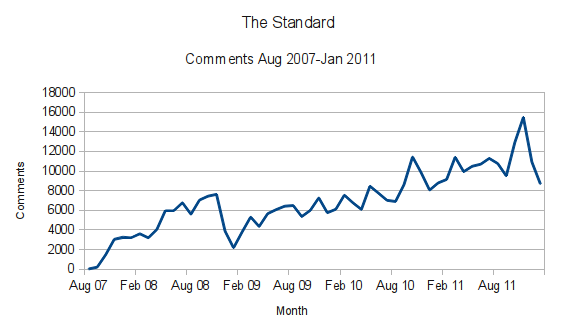 You can see the post election slump in December 2008 and Jan 2009 had a virtual reprise of the December 2010 and 2012, albeit from a much higher base and for much the same reasons. The effects of the very short election season in 2011 shows in our comments which actually decreased while the world cup was on in September and the first part of October and then went through the roof after the final game.

But there has been healthy growth throughout the year and the numbers for the latter part of Jan and early Feb point to the comments on the site remaining pretty healthy, but unlikely to repeat the November numbers for a while. Probably in the post-winter commenting boosts. But of course commentators don’t just come to argue with each other. They come for the posts as well. 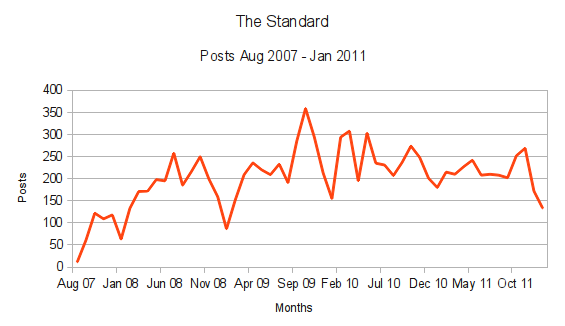 And then we look at the numbers of posts. There you can see the usual post election slump adding to the usual reduction in authors writing. But overall we maintaining the numbers of posts with spiking going on in times of interest. However what we are seeing is a change upwards in the number of comments per post. 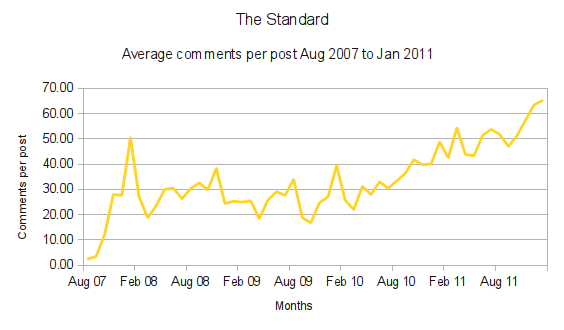 The spike in later 2007 and early 2008 shows exactly what happens when there is no moderation. You get a considerable increase in trash commenting as the trolls pile in. The average size of the comments goes down (if I get time I’ll put a post up on that) and you notice the lousy commentators drowning out anyone that looks interesting – the sewer provides a good example. When the moderation kicks in and becomes effective the number of comments slumps but the size of the comments, their quality increases, and you see interesting commentators return.

But since early 2010 we have had a steady increase both in the number of comments and crucially in the number of commentators.  We’re also seeing that interesting effect that even when the authors are taking their hard earned rest and the numbers of posts decrease, the commnets carry on as people make their own fun. The threaded nature of the comments sections makes it feasible to do.

Not everyone is particularly happy with the style of moderation on this site or even the style of the site. But it works and I’m more than happy with what we’re doing together.

This particular query eliminates the small number of posts that have no comments (mostly from 2007) and includes the few image pages that have comments that were never moved.  It is close enough for my purposes.