Mr Peters had wanted the Financial Markets Authority (FMA) to investigate what he said was an apparent surge in the share sales last Friday.

Mr Peters said Parliament had been told that the Government and SkyCity agreed on Friday the company would get no taxpayer money to build a convention centre in Auckland.

He said there was unusually heavy trading of the company’s shares that day, despite the absence of a public announcement.

FMA compliance director Elaine Campbell said the NZX had taken up the matter.

She said given the nature of the allegations being made, the authority would update the market when the NZX had completed its review.

Financial analysts have told Radio New Zealand that heavy trading was to have been expected, as Sky City has recently released its financial results.

The analysts said there was no major change in the share price or anything else irregular.

I have no time for Peters and his populist style of politics and I think any relationship between Labour and New Zealand First needs to be treated very carefully but on this issue Peters may have a point.

It is true that SkyCity had just released its six month financial results but my quick reading of the report does not provide any justification for the share price urging.  Earnings per share was down marginally and it was acknowledged that ongoing negotiations with the Crown over the Convention Centre posed some uncertainty for the company’s future finances.  From the report:

Group normalised revenue (including gaming GST) was up 9.2% to $510.0m. Normalised EBITDA was up 3.1% to $154.4m and normalised Net Profit After Tax (“NPAT”) of $66.6m was only up marginally on the previous corresponding period (“pcp”). Overall, the strong results of Auckland and IB were curtailed by the poor result of Adelaide

SKYCITY Auckland, our flagship property, was again the standout performer across the group, with normalised revenue up 17.2% to $302.5m and normalised EBITDA up 15.0% from $108.1m to $124.3m. This strong growth continues the positive momentum exhibited during 2H14, with growth across all business segments, delivering four consecutive quarters of EBITDA growth, on pcp

Some pointyhead accounting type may be able to explain why the figures are so good but to me they looked static and there is the uncertainty caused by the ongoing negotiations. 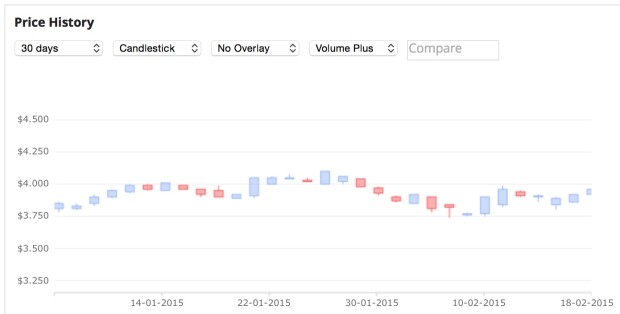 So at a time you would think the share price would go down it went up.  And then the formal announcement was made.

On the 11th 956,000 shares were traded which was a figure higher than any previous figure for the past 30 days.

It will be interesting to see the results of the NZX investigation into the matter.