There was a really good article on slave fishing in the latest Sunday Star Times. You won’t find much praise for Talley’s on this site because of the anti-union tactics they employ in their factories. But, fair dues, they harvest their fish with Kiwi crews and have come out strongly against their competitors who try to make an extra buck off the exploitation and environmental damage wrought by the foreign charter vessels.

Decrepit foreign fishing vessels crewed with sweatshop Asian labour are destroying New Zealand’s international reputation for safe and sustainable food and are ruining our ability to catch our own fish.

These claims come in submissions to a joint ministerial inquiry into the use of foreign charter vessels (FCVs) that take 62% of the deep ocean catch and almost all of the Maori fish quota.

Their crews pay no tax, but are covered by the Accident Compensation Corporation. The vessels ignore safe-ship standards as well as employment, health and safety laws. Crew on FCVs are paid a quarter of the rates paid on New Zealand-flagged boats.

FCVs were having a “punitive impact” by “robbing New Zealand Inc of substantial economic wealth and exposing our industry to significant risk”.

Media reports and Auckland University studies into the conditions suffered by around 2500 mainly Asian men working 26 boats prompted the inquiry.

Since quota management started in 1986, FCVs have created a wild west fishery while sending the local fishing fleet into decline.

“Most of the catch from FCVs is processed in China utilising slave labour and then resold into the world markets as ‘Produce of New Zealand’,” said Talley’s.

The company added that FCV catch is outside normal food security checks in New Zealand.

FCVs account for 90% of all seabird strikes, said Talley’s, and 70% of all deep water offences and 100% of ship desertions. That is why New Zealanders don’t work on the boats. “[Nobody] should have to work in those conditions and certainly not in New Zealand.”

Talley’s was puzzled why Maori leaders argued for FCVs when so many Maori were unemployed. The company suggested Maori should investigate “demise charter” which means hiring an empty boat and providing the crew. In contrast, FCVs are on time charter, which is like hiring a taxi.

“Influential Maori should demand a change in direction that would allow a group of Maori fishermen to demise charter a fishing craft and crew it with their young people.”

Iwi who made submissions said they could not afford to own boats, but Talley’s said that was a side issue.

FCV supporters said the vessels take fish that would otherwise be uneconomic to catch.

Talley’s said that was no justification: “If it is uneconomic to harvest a New Zealand resource under New Zealand labour conditions and costs then it is not a resource. Blood diamonds and Asian textile sweatshops use the same justification.”

That’s a bloody good statement at the end. I want to see all Maori politicians (and others) come out resolutely against the abuse of foreign workers and the environment by foreign charter vessels employed by corporate elites who have forgotten their kaupapa and their duties to their people and mother earth in pursuit of a few extra bucks.

Oh and Sealords doesn’t just try to justify its use of third-world slave ships, it also doesn’t want to pay for its carbon emissions. The iwi elite who are profiting from this ought to be ashamed of themselves. 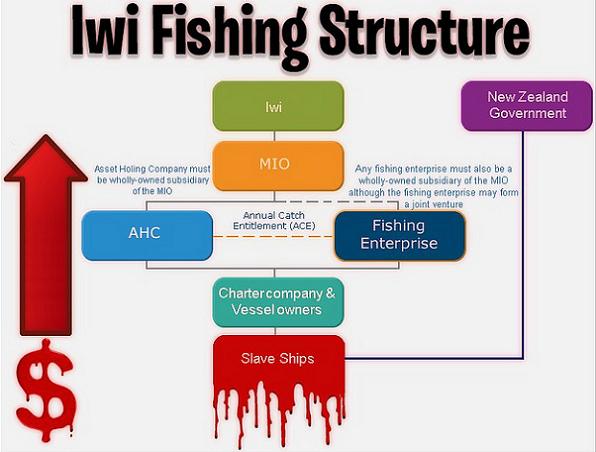