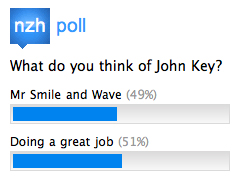 These online polls are always silly, but it’s interesting to track the spread of the “smile and wave” meme. (Hat tip mickysavage in comments).

The phrase is also used in the article itself:

It is a reference to the moniker given to the Prime Minister by the Labour-affiliated Standard blog to reflect its view that John Key dismisses problems with a smile rather than considering them with the gravitas required.

Conveniently, that nice Mr Key has handed Labour some grist that very day by claiming Maori co-leader Tariana Turia was not upset about his last-minute decision not to include Te Urewera National Park in a settlement with Tuhoe.

As it turned out, Mrs Turia was indeed upset and film of her marching up to the camera lens to tell the nation of Mr Key’s mistake had screened only half an hour earlier.

“I saw ‘Smile and Wave’ on telly tonight,” Mr Goff tells his audience.

“That was a classic example of how the National Party is telling Maori one thing and the rest of the country another thing. When you speak out of both sides of your mouth it will catch up on you.”

Indeed. Speaking of memes however, for the record this blog is not “Labour-affiliated”. It’s a leftie blog supporting the broad aims of the labour movement. It is affiliated to no party, and as many of the writers here support The Greens as Labour or other parties of the left. If you want the Labour affiliated blog, go to Red Alert.