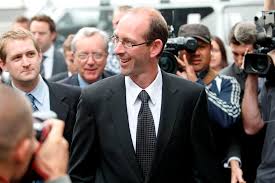 This makes you wonder if the tip line has reopened.  Someone has leaked details to the Herald from the draft report on whether or not to award compensation to David Bain.  From the Herald:

David Bain has suffered another blow in his compensation claim for wrongful imprisonment following a confidential report by a senior judge found he did not meet the threshold of “innocent beyond reasonable doubt”.

The report has just been delivered and the Government has not yet begun any consideration of the latest development in the Bain case, which has divided the country for years.

His review has been delivered to Justice Minister Amy Adams …

The Herald understands that the judge did not find that Mr Bain is innocent beyond reasonable doubt — the benchmark for “extraordinary circumstances” required for compensation under previous guidelines.

The test, proving innocence beyond reasonable doubt is extraordinarily difficult.  It is appropriate to have as a test for proving someone’s guilt, because there should be some certainty before the state is permitted to punish him or her.  But to have it as a test for compensation makes only the most remarkable cases likely for compensation.

And somewhere along the line it seems that the threshold has been changed.  In February last year the Herald ran this article concerning Bain’s claim for compensation.  It contained this passage based on information supplied by Adams’ office:

To satisfy the compensation threshold, Mr Bain would need to prove his innocence on the balance of probabilities and satisfy Cabinet that the circumstances were “sufficiently extraordinary” that it would be in the interests of justice for compensation to be paid.

There was no mention in that article of proving innocence beyond reasonable doubt.

So Bain needs to prove he is innocent on the balance of probabilities and then show there are extraordinary circumstances by proving his innocence beyond reasonable doubt.  If that is the test the designer has rocks in their head.

The whole episode has been riddled by poor handling by the Government.  Judith Collins egregious breaches of natural justice and the unprecedented attacks on Ian Binnie, the Canadian Jurist who undertook the original review meant that the Government had to scrap the original finding and start again.  I describe the background in this earlier post.

It looks like the Government is moving to refuse Bain’s application.  But if this does I can confidently predict that an application for judicial review will follow.

142 comments on “Someone wants to crush Bain’s compensation claim ”