The evidence is everywhere.  Million dollar suburbs are the norm in many areas.  Teachers, police, nurses and other important state servants are fleeing the city because they can no longer afford to live here.  And every day families whose parents have jobs are living in cars and people are sleeping rough in reserves and parks and  town centres throughout the region.

Things have never been this bad in my lifetime.  They may have been worse in the 1930s but this is a pretty low bar to set.

Radio New Zealand this morning has presented news suggesting that the Government’s flagship policy, the Special Housing Area legislation, has produced less than a hundred affordable houses at a time that thousands are required.

Auckland Council’s solution for the city’s housing crisis has been running for four years but it still cannot say how many affordable homes have been built.

The council has set up more than 150 Special Housing Areas (SHAs) with the government, under the Housing Accord, in order to fast-track building tens of thousands of new homes.

Under the deal at least 10 percent of large developments have to have cheaper homes for first-home buyers on modest incomes.

But the council said it had no single system for monitoring exactly how many had been built and sold.

It said it had received 83 statutory declarations since April 2016 from developers who had sold an affordable house to someone who fit the criteria.

Nick Smith was interviewed and produced this train wreck .  He has this uncanning ability to sound completely confident at a time when he is surrounded by compelling evidence that his policies have failed.

He tried to claim that the Government’s policies were succeeding because the SHAs have produced more houses.  The fact that so few of them are affordable does not matter because market.  It makes you wonder why.

He also suggested that the Government never thought that the affordable housing provisions of the Auckland Housing Accord and the legislation would work and that the only solution was to increase supply.  If I had a dollar for every time in the past he has claimed the Government was doing something for the housing crisis because of the special provisions I would be a very wealthy person.

He said that there had been growth in housing completion numbers for the past 6 years and housing affordability has improved.  As to the former claim well it was after the Global Financial Crisis and as to the latter I really doubt it.

And this graph from the Auckland Mayoral Housing Taskforce Report clearly shows the problem.  The growth in households is outstripping housing completions by a long margin. 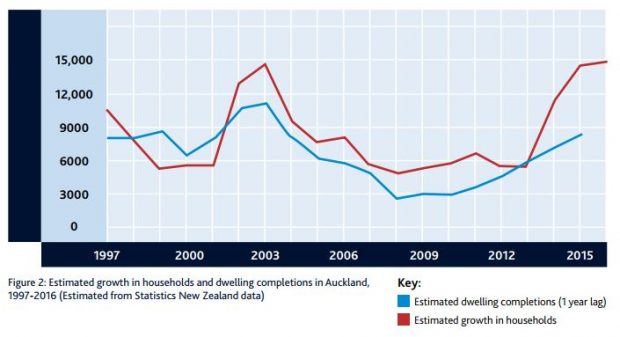 People are seeing through Smith’s alt facts. It really is time to change the Government so that we have a regime that actually gives a damn about the problem.

Imagine. Your vote this election could mean Nick Smith was no longer fucking up housing and the environment. Just think about that a minute

Yo, Aucklanders, Nick Smith is 'pleased' that houses up your way are more affordable. $870ish medium price. How that working out for y'all?

@NZMorningReport Nick Smith says "affordability in the eye of the beholder." What a cop out. Labour will build 100,000 affordable 1st homes.