The working age population grows by around 30,000 a year. A bit over two-thirds of them work or want a job. So, to keep unemployment from rising, the economy needs at least 20,000 additional jobs per year. So, the drop in unemployment must mean we did that and some last year, eh? No. Just 8,000 jobs were added last year. Unemployment fell because people dropped out.

The working age population rose by 30,000 last year but the number of people in the labour force (ie in work or officially unemployed, that is, without a job and actively seeking one) fell by 7,000. There’s more than 27,000 fewer people in the labour-force than we would have expected. Those people have given up actively looking for work. They may have retired early or become a stay-at-home parent or taken up study or they may be ‘jobless’ (that’s the officially unemployed plus people who want a job but aren’t looking ‘actively’ enough to meet Stats NZ’s definition of unemployed).

Um. It’s better than nothing. But it’s the worst result since the end of the recession. 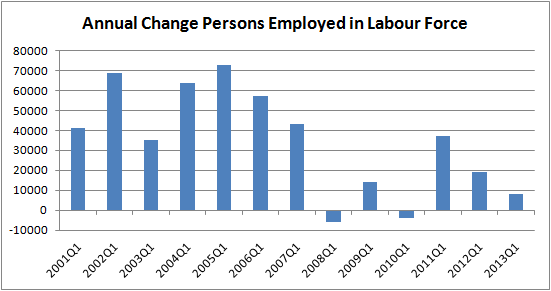 Let’s look at it the other way round. 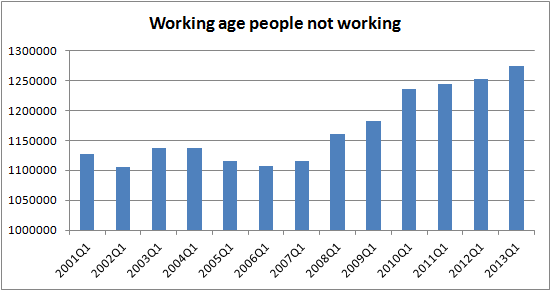 And that’s why the headline unemployment number is a stupid number to look at. It can fall if people get jobs OR if they give up looking for one. You want to look at the number of jobs. And it ain’t a pretty picture.