White House press secretary’s angry declaration that the media faked low attendance does not stack up against photos, videos and public transport figures

Photographs of the National Mall in Washington DC and public transport figures for the city cast serious doubt on Sean Spicer’s angry insistence that Donald Trump drew “the largest audience ever to witness and inauguration, period, both in person and around the globe”.

In his blistering debut as White House press secretary on Saturday, Spicer accused journalists of reporting inaccurate crowd numbers and using misrepresentative photographs “to minimise the enormous support” that he claimed the new president enjoyed at his swearing-in.
…
Before Spicer’s briefing room tirade on Saturday, Trump had told an audience at CIA headquarters that he had given his inauguration address to a “massive field of people … packed”, he estimated, with between 1m and 1.5m people. …

These are easily disproved lies, as per the evidence and photos in The Guardian piece, and indeed all over the news and the net. (Update: Apparently the Trump term for these lies is “alternative facts”.)

I suppose it is not unexpected from Trump, who is either a habitual liar or completely delusional (or both). But why does a newly minted White House Press Secretary start out by trashing his credibility like this? I think Garry Kasparov had the most interesting take:

Obvious lies serve a purpose for an administration. They watch who challenges them and who loyally repeats them. The people must watch, too.

See also this musing on Vox:

Trump’s real war isn’t with the media. It’s with facts.

…“This was the largest audience ever to witness an inauguration, both in person and around the globe.”

This, along with much else Spicer said, was plainly untrue. But there’s a strategy at work here. The Trump administration is creating a baseline expectation among its loyalists that they can’t trust anything said by the media. The spat over crowd size is a low-stakes, semi-comic dispute, but the groundwork is being laid for much more consequential debates over what is, and isn’t, true.

Delegitimizing the institutions that might report inconvenient or damaging facts about the president is strategic for an administration that has made a slew of impossible promises and takes office amid a cloud of ethics concerns and potential scandals.

It also gives the new administration a convenient scapegoat for their continued struggles with public opinion, and their potential future struggles with reality. This kind of “dishonesty from the media,” Spicer said, is making it hard “to bring our country together.” It’s not difficult to imagine the Trump administration disputing bad jobs numbers in the future, or claiming their Obamacare replacement covers everyone when it actually throws millions off insurance. …

Method perhaps, to the apparent madness. 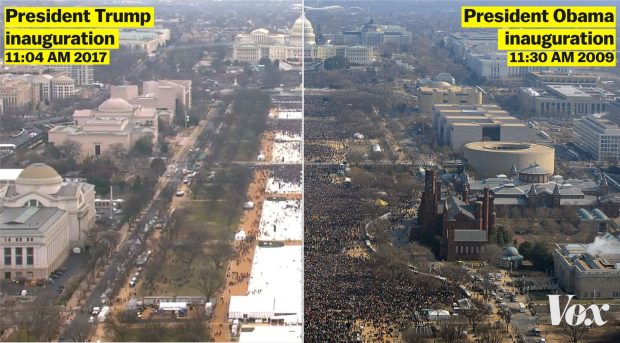 Obvious lies serve a purpose for an administration. They watch who challenges them and who loyally repeats them. The people must watch, too.

"The Party told you to reject all evidence of your eyes and ears. It was their final, most essential command." (Orwell)#AlternativeFacts

195 comments on “Starting out with an obvious lie ”