Stick a fork in them, they’re done 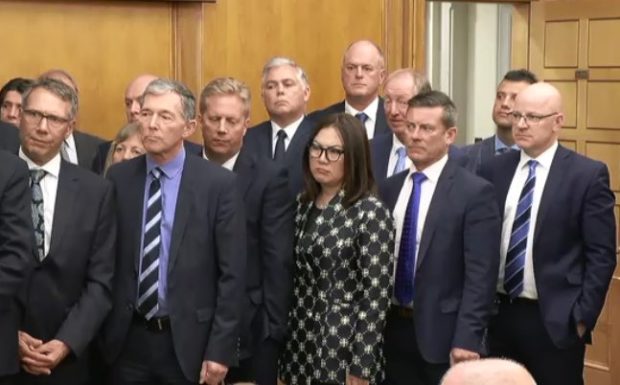 I have been criticised for posting too much about National lately.

I admit that I have done a lot of attack posts on National.  There is so much material to work with and pointing this out is good for our country’s future.  So what is a blogger to do?

My fascination is in part because I had an inside view of what happened to Labour in 2012-2014 and I learned to spot the evidence, see breaking media stories obviously seeded by one party or another and the way they wrecked havoc and caused the media to buzz around one leak or another and create the scandal of the day.

Things are different now.  I can sense no Labour briefing of the media to try and create an attack on National.  Every attack story is coming from sources within National.  Clearly they would eat their young for political advantage.

The best comparison to the current shitstorm is National’s creating of a media narrative in 2014 around Donghua Liu, where an actual donation to the National Party was converted into a fictitious donation to the Labour Party and a full on attack on David Cunliffe because 13 years earlier he had written a pretty benign letter on behalf of Liu asking when Liu’s citizenship application may be granted.

I posted about it here.  Rereading the post still causes anger and amazement.

That episode showed one party at the peak of its ability to suck in the media to attack its main opponent.  I hope that the media is still embarrassed by what happened.

Let us move forward to yesterday and work out what happened.

Jacinda Ardern’s Labour Party, God bless them, have decided not to get into dirty politics.  Good decision.  Us lefties always sucked at it when we tried.

All of Nationals problems are coming from within.  The only question is which National Party faction is currently briefing against the other faction and why.  This recent Claire Trevett article suggests both factions and as much as possible.  The dim dark days of Labour in 2014 is but a gentle walk in the park by comparison.

Bear in mind that what Trevett was reporting on are caucus discussions and if there is ever a party meeting where discretion should be observed it is a caucus meeting.

But the only conclusion that can be drawn is that each faction has weaponised leaks against the other faction.

Let us play our favourite game, which National Party faction (Judith or Simon) leaked this to the media?  Trevett’s article (paywalled) made the following claims:

Definitely the Simon faction.  Kuriger went from 21st caucus ranking under Muller and is now ranked 14th in Judith’s list.  Such promotions do not come without jealousies arising.

Judith faction.  Muller should have been allowed to resign with a modicum of dignity.

That is working well.

What is amazing is the detail that Trevett reported on.  It is as if she had a prime seat in the middle of the Caucus meeting and was equipped with popcorn.

On Wednesday, the day after the meeting Simon Bridges posted on facebook:

“Speaking with the press is a normal but important part of being in politics. For me it’s an opportunity to speak not only to journalists, but to all New Zealanders.”

The overwhelming conclusion from this is that Simon still wants to be leader.  And that National is stuffed.  I just hope that they continue with their civil war.  The country will be a better place because of it.