I’m always amazed at the intellectual hoops the neoliberal right will jump through to try and deny low income workers minimum wage increases.

David Farrar has a piece up today highlighting the case of Honduras, where they’ve apparently raised the minimum wage by 60% in one go, causing higher unemployment.

This, he says, highlights the dangers of raising the minimum wage and should

“serve as a lesson for those who think you can make everyone richer simply by increasing the minimum wage”.

I couldn’t think of a stupider strawman argument if I tried.

No one sensible suggests lifting the minimum wage here by 60% immediately – even Labour’s policy to lift it to $15 an hour by 2011 amounts to a 25% increase phased in gradually over three years.

And there’s no evidence that such a moderate phase-in of a higher minimum wage would lead to higher unemployment. After all, under the last Labour government the minimum wage increased by 70% over nine years, yet unemploment actually halved in that time.

Of course, Davids’ right that you can’t make everyone richer by increasing the minimum wage, but he misses the point. The minimum wage isn’t there to “make everyone rich”, it exists to ensure that people on low incomes are able to live their lives with some basic dignity and security. That’s something the neoliberal right seems to have a hard time understanding.

[The graph below is something I whipped up a while ago plotting the real minimum wage against unemployment. You’ll see there’s no real correlation between the two, despite what your orthodox neoliberals might tell you.] 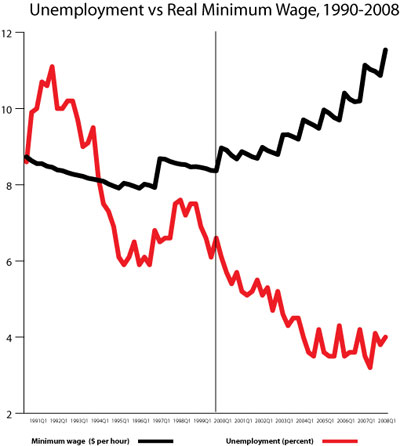