Judith Collins appears to be fighting a hopeless battle.  Clearly the battle for National’s leadership is between Adams and Bridges.  And perhaps Collins is battling for relevance and her future.  With a field of at least three and a preferential voting system her endorsement would presumably determine who wins.

But she is waging a very public campaign for the leadership.  This is interesting because the only people with votes are current National MPs.  Her strategy essentially accepts she does not have the numbers in caucus and she is hoping that external pressure will pressure caucus members to support her.

Collins was the first to announce.  And since then she has tried to live up to her campaign theme of being strong and decisive.  That closely that she has been caught being a bit of an idiot. 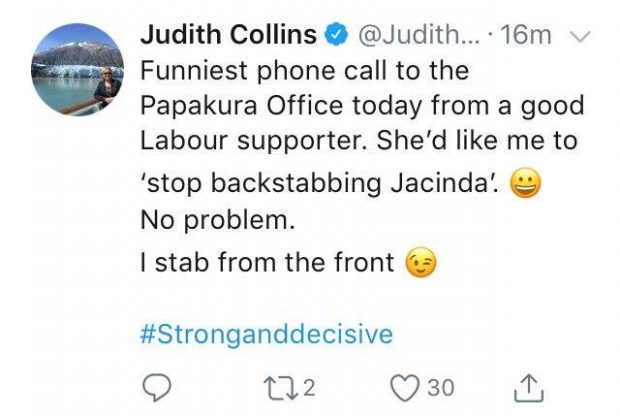 I would not call her statement Strong and Decisive.  Brutal and Obdurate would be more appropriate.

Clearly as part of her campaign she wishes to continue with the theme that she is tough.  Pictures of her holding guns and her preferred nickname “crusher” is evidence of the public persona she has wanted to create.  And she desires to appear to be more right wing than the others.

From Audrey Young at the Herald:

Leadership hopeful Judith Collins says National has gone too far to the left and it is time to “straighten up.”

And asked about the other two contenders for the National leadership, she said Amy Adams was more to the left than Simon Bridges.

But she would not speculate on whether that meant her supporters in the caucus would be more likely to back Bridges if she was the first to drop out after the first ballot.

The article then confirmed she is running an outside support strategy.

“What I know is that there is a tremendous amount of support out there for what I stand for,” she told the Weekend Herald.

“And a lot of people feel that we as a party have gone a long way to the left and we need to straighten up again.”

She said she had strong support among the grass roots and National Party base.

“I think you can also say that I am not the conventional or the status quo candidate and so I have to work differently from those who would continue pretty much the same old policies and same old ways of doing things.”

And she is perfectly willing to play the race card as well as displaying her lack of understanding of MMP or the need to build coalitions amongst different communities to gain the Government benches.

In questions put to all three candidates by the Herald, Collins cited the Resource Management Act as the first policy that needed to be reviewed.

Referring to the iwi participation agreement she said: “The changes we made to accommodate the Maori Party unfortunately overshadowed some of the excellent changes that we tried to make.”

So she is happy to trash iwi relations as well as environmental protection in her pursuit of the leadership.  Thankfully the way I see it there is no way to stitch together an MMP majority with this world view.  There are far too many people who support such matters for an attack on them to work.

Meanwhile National cheerleader Heather Du Plessis Allan has come out swinging for Collins, said in a figurative way.  She thinks Crusher’s strong girl image is a benefit and has written a column where she says this:

A week ago I would never have said that. I would’ve told you Crusher was too intimidating. Too fierce. Too right wing. Too tarnished.

But, in one way or another, each of those things either doesn’t matter, or are exactly why she should be elected leader of the National Party.

Judith Collins may be the only person in National capable of knocking holes in Labour’s biggest asset: Prime Minister Jacinda Ardern.

She thinks that violent imagery is a good thing.  She should reconsider this.  We are talking about who should become the leader of a major political party not the head of a gang.

We will have an interesting week and a half until the decision is made.  Stand by for a few more sneaky hatchet jobs on National MPs.  But none from Judith Collins.  After all I am sure we can believe here when she says she would only stab from the front.  There is no evidence that she would engage in subversive sneaky dirty politics.

But I secretly hope she wins.  I am confident the people of New Zealand are far too intelligent and compassionate to ever want her to be their leader. 154 comments on “Strong and decisive ”