Today, outstanding student loan debt reaches $10 billion. That’s a fair old swag of money but what has been ignored in the coverage so far is that this debt is interest-free. Now, an economist will tell you that the price of money is the interest rate, so student loans are free money. It’s not quite as simple as that because, as a loan holder, you have to pay 10 cents in every dollar you earn over $18184 towards the debt but, still, student debts are nowhere near as expensive as they were when there was interest on them.

Say you borrowed $10,000 each year for three years ending this year and the loan would be repaid by compulsory repayments alone. Here’s how it would look with Labour’s interest-free policy, just interest after studying, and interest all the time, like when National was last in power (normal assumptions: inflation 2.5%, real wage growth 2.5% starting at $40,000, interest rate 7%). 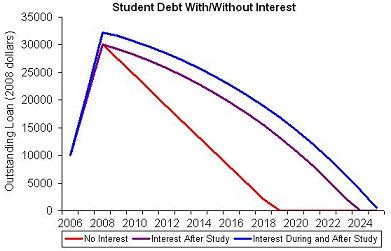 Because inflation means an interest-free loan is actually worth less in real terms over time; the interest-free $30,000 will cost only $26,000 in today’s dollars to pay back over 10 years. If there was still interest once study had finished repayments would be 57% more. Under National’s interest all the time policy, you would pay 74% more than you do under Labour’s policy and it would take seven years longer.

Labour could do better for tertiary students, there ought to be a universial allowance for starters, but they’re much better off than when National was piling interest on their shoulders.

48 comments on “Student debt, it’s the interest that matters ”