Director of Greenpeace Russell Norman said recently that if we want to prevent the worst of climate change we can’t afford to burn the fossil fuels we already have access to, so why go look for more?

Gareth Hughes from the Green Party was in Te Anau last month talking to locals and checking out the area within the newly released Western Southland Basin oil exploration block. He made a short video,

National has proposed opening up land around Lake Te Anau to oil drilling. The @NZGreens will protect the places we love and our climate pic.twitter.com/I1xmfLYTaq

I disagree with Hughes about the tourism angle. Industrial tourism is also a threat to the environment. Directly from development and indirectly (thus far) from climate change, to which tourism is a contributor not just from international flights, but from internal travel and infrastructure and resource use. Nature deserves to be protected for its own sake. We put it at risk when we frame the protection around something as transient as the tourism industry.

But the general gist is that we have to protect these places and we have to stop burning fossil fuels. They go hand in hand.

The Western Southland Basin block map is here. The area butts up against the south east edge of Lake Te Anau and takes in the Te Anau Basin, the lower reaches of the Waiau River, and a big chunk of the plains north of Invercargill that includes the catchments of the Aparima, Oreti and Makarewa Rivers . You can scroll around the area in this map. So what’s the risk here? Energy Minister Judith Collins says that no oil exploration is allowed close to a National Park or World Heritage Area. Which is technically kind of true, in that Lake Te Anau itself isn’t part of Fiordland National Park. That’s alright then Judith.

One of the things that stands out for me is the sheer amount of water in the area. Not only is there Lake Te Anau and the Waiau River, but the Southland Plains are essentially a system of creeks and rivers and remnant wetlands. There’s more to understand here. Where are the likely places to be drilled? Will there be fracking? Where are the earthquake faults and what are the risks? Will Southlanders have choices about what happens under their land? What consents and permits will be needed from local authorities and is there a conflict between that and council investments in fossil fuels and the push to divest? Who would pay for environmental damage? Would it be fixable?

Are there conflicts between being a pro-exploration council and Environment Southland’s intended Southland Water and Land Plan?

Ultimately the issue centres on the point of tension between saving the places we love as we move to zero carbon, and the last but potentially vicious gasps from a dying fossil fuel industry and the people who support money over life. Will Southland be deemed unviable or will it become a battleground as fossil fuels become harder and harder to source? How much energy will get wasted in that battle is also a concern, and how long do we have to keep litigating these matters when the climate change storm is already on our doorsteps?

For those that don’t know the Deep South, here are some of the more picturesque parts of Southland that are within the oil exploration block. 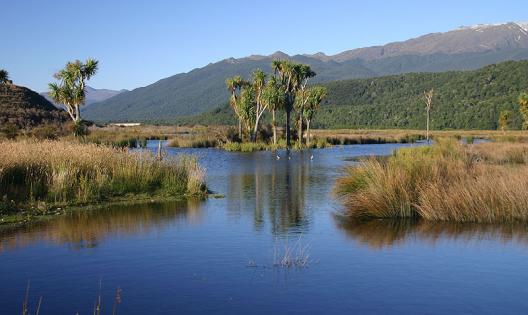 Fishing on the Waiau River