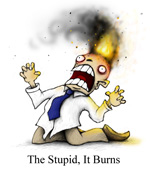 Our government is stupid. Sorry, it’s the only conclusion I can draw. Our government is made up of confused, muddled thinkers incapable of planning further ahead than lunchtime. It would be funny if it wasn’t so tragic.

National have decided to “scrap the Energy Efficiency and Conservation Strategy and stop work on vehicle fuel efficiency standards” (hence the split with the Greens as first reported by Pundit). These are bizarre decisions. At a time when energy costs are rising, and the costs of emissions are going to rise, we are gutting our attempts to improve energy efficiency and conservation. It’s stupid, it’s going to increase costs, it’s going to damage the environment. Jeanette Fitzsimons calls this “a retrograde vision of energy efficiency” and says:

… I introduced the Energy Efficiency and Conservation Bill in 1998, later passed in 2000, which gave the power to set Minimum Energy Performance Standards (MEPS) for products, as most of the world had been doing for some time. Territories which have succeeded in substantially reducing the energy they use to produce goods and services, like the stand-out example of California, ascribe most of their success to a system of codes and standards for buildings, products and vehicles.
…
I have trouble understanding the antipathy of the National Government to standards of this kind. Products have not become more expensive. There is still a huge amount of choice. It seems to be ideological.
…
You don’t have to be a genius to see that the new Energy Efficiency and Conservation Strategy will be a huge step backwards.

So what kind of thinking lies behind National’s retreat from reality? Here’s John Key trying to explain his resistance to efficiency standards for cars:

Count the stupid: (1) More efficient cars are cheaper to run, the higher upfront cost (if any) will be quickly recovered – see for example some UK figures. (2) Any increase in upfront cost is only met by someone buying a new car – i.e. someone who has decided that they can afford it – those who can’t will be buying second hand from the existing fleet. (3) Of course it will improve the emissions profile because of course Kiwis won’t stop buying new cars. (And in any case how can it impose significant costs on us if we stop buying new cars? – you can’t have it both ways John!)

As if this wasn’t bad enough, according to NRT National are also effectively abandoning planning for renewable energy sources:

… Fortunately, Labour moved to [channel] $4 million a year into sustainable energy development. And then, there was a change of government. National doesn’t believe in renewables, and doesn’t believe in sustainability, and so in their first budget they cut that funding from 2011 [PDF; p 146]. Now, they’ve released a new “feedback document” on their research priorities. The word “renewable” doesn’t appear in it once. As for energy research, it has been grouped together as “energy and minerals”, with a focus on Increas[ing] New Zealand’s wealth by identifying and exploiting hydrocarbon, mineral and other resources. In other words, finding more coal and gas to dig up. “Short-sighted” doesn’t even begin to describe it.

So we’re abandoning conservation and efficiency and renewable generation. This is so stupid it burns. Key may think that he’s avoiding hard decisions (it’s all about re-election to him), but that is an unambitious position born of fear and limited vision. Going green can save money for individuals and create opportunities within the economy. Instead, Key and his government offer no moves to address the challenges of our times, and selfishly pass off the costs of this abject failure to future generations. Cowardly as well as stupid.