Some kids threw soup on a famous painting, and lots of people were pissed off.

Some young Just Stop Oil climate activists staged an action to wake people the fuck up. Did they wake up? You choose.

“What is worth more, art or life? … are you more concerned about the protection of a painting or the protection of our planet and people?”@JustStop_Oil’s activists explain their action pic.twitter.com/mGNZIO6RbK

The action is both wrong and right, understanding this matter, because it is also beyond that. I watched people working through the issues on twitter yesterday, and remembered how I was unsure about Extinction Rebellion’s similar attack on a Picasso last week. My head is saying some stuff about whether it’s helpful, my body, heart and soul is cheering them on. Listen to the power in that young woman’s voice, watch her hands shake.

Even if you disagree with the method, stand beside them, because they are willing to do what is necessary. These are scared young people stepping up, taking risks to their future, laying down a huge challenge, while most people are sitting on their hands and ignoring the climate crisis that is unfolding.

Micky wrote a post the other day about the latest development from the New Zealand government on climate, and the huge problems with the regressive positions of National and organisations like Federated Farmers: Climate change: I think that we are f&*ked

We’re only fucked if we believe that government/farmers/big business will lead. They won’t, they will follow. The people leading are those two young women throwing paint at art and gluing their hands to the wall. Or SS4C. Or the myriad of indigenous groups who have been working on climate for decades. Or the people who are already devastatingly affected by climate and choosing to act instead of despair. The climate NGOs and activists. The ones willing to put their bodies on the line. Those are the people who are leading the change.

Once the narrative changes, once people accept how bad things are but that we still have choices, then we will get the mass movement that will shift governments and the powers that be.

The great European art as a target for climate action. Destroying beauty is an act of self harm. On a level it’s wrong, but it’s also an act of power. It’s painful and challenging, and it may be one of the most important things we need.

If we condemn the apparent harming of a painting, how then do react to the destruction of a whole continent of rainforests? Read this if you dare, and then choose your response,

As a culture we need to ask ourselves why throwing a can of soup over a painting (with a protective cover) gets more attention, trends higher, than the coming collapse of the Amazon rain forest. #VanGogh https://t.co/mz8aY9a5AV

If you have found yourself picking a side for the Van Gogh and against those two women, that harming art is always wrong, then I’m going to ask you why you side with the painting and not the forest? How much difference does it make to understand that the painting isn’t harmed (it’s covered by a sheet of glass), but the forest is failing as we speak. Why are we arguing about the painting that isn’t even harmed, and why are we not doing everything we can to save the forest and ourselves?

Only Civil Resistance can get us out of this crisis — it’s time to step up and stand up for what’s right.

But why attack paintings? Why not go after oil execs or the banks?

I'm seeing people asking, 'Why aren't @JustStop_Oil protesting at oil companies instead of at the *National Gallery*?', which is a reasonable question, but:
a) they have been
b) they've been thrown in prison for it
c) if you hadn't heard about that, there's the answer to your Q. https://t.co/aN8m25ENSX

Earlier this week all the windows at the research centre of the world's largest fossil fuel services company – Schlumberger – were smashed. Surely a "legitimate target" if ever there was one. But no media reported it, no blue tick scientists praised it. Do you see the problem? pic.twitter.com/T5dKgHIbtv

hot take: when was the last time a climate protest of any kind headlined the NY Times, completely dominated your timeline, disrupted exactly zero working class folks, did no damage — and explicitly named the fossil fuel industry?

these protestors are brave. we need more of them. https://t.co/9IVU2N9RTM

This is my thinking, we need more of them. It’s not that these acts won’t be effective, it’s that there aren’t nearly enough of them. Yet.

Here’s something else to understand about this protest. The closer we get to climate collapse and not taking meaningful action, the more desperate people will become. The Van Gogh and Picasso actions will be mild in comparison. This isn’t about right/wrong, or fairness, it’s about the degree to which increasing numbers of people will feel they have to act.

Maybe the point here is that we think we still have choice about saving beautiful art. But all art will fall as the Amazon does, and this seems to the stuck point: we believe that we can survive without the forest. We can’t. From the above tweet,

… the Amazon is fast approaching a tipping point where it will cease to be a functioning rainforest, without which the world cannot avert dangerous global warming. If “we lose the Amazon, we lose that fight” against climate change, WWF chief executive Tanya Steele warned.

I’ve seen a lot of criticism of the action and the two young people, I have yet to see alternatives for acting now with the urgency and power needed. This isn’t to say breaking the painting is good, but maybe if more of us were on board people wouldn’t be this desperate.

There are of course a multitude of things we can do, all of us, right now, to effect change. We are by no means powerless. Take in the seriousness and terribleness of the situation, but don’t give up. Stand up and fight. 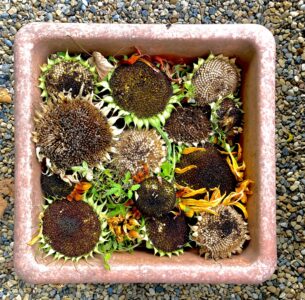