Former National MP and in his imagination potentially the next Prime Minister Aaron Gilmore has reached the headlines for not paying compensation to a former employee of his company as agreed and for describing her lawyer as a well known union socialist.

Foster-Bell seems to be a cross between Aaron Gilmore (vanity), Todd Barclay (people skills) and Bill English (high on the hog). No surprises there then, Nat MP, ho hum. The more interesting question is – who is out to knife him? Two hits in two days?

Don’t be mean to John!

Who said it? Shane Reti vs. Aaron Gilmore

The meaning of utu

Aaron Gilmore has promised ‘utu’, or reciprocation, against a select band of National insiders. What’s going on behind the scenes?

Aaron Gilmore has given into pressure from his National “mates” and resigned.

The King stay the King … the pawns, in the game, they get capped quick

So, Key wants Gilmore gone. Gilmore lied to Key about the whether he threatened the waiter with the wrath of the PM’s office. Bringing Key’s office itself was bad enough but Key accepted Gilmore’s lie. When that lie was exposed, Key knew his authority as leader had been trifled with. Gilmore now has to go. But Key can’t boot him. So, out is coming the dirt.

What if Gilmore quits?

Stuff is reporting that John Key is signalling for Aaron Gilmore to stand down.  What are the possible implications? [update: information about Claudette Hauiti, next National’s list]

From a text exchange leaked to Newstalk ZB it seems that Aaron Gilmore has lied to the PM. The ball is in Key’s court now…

John Key’s NZ: the nasty side of the “brighter future”

John Key promised a “brighter future” – “wave good-bye to higher taxes not your loved ones”; a higher standard of his MPs, and honesty for the PM. John Key’s NZ is actually one of callous entitlement of the elite, and dis-entitlement and Struggle Street for battling Kiwis.

Giving the game away

Aaron Gilmore, eh? He’s clearly finished in the National Party. Not for the view he expressed when he threatened to get a young waiter sacked, but because by doing so he’s lifted the veil on the carefully covered elitism that drives the national party’s agenda. 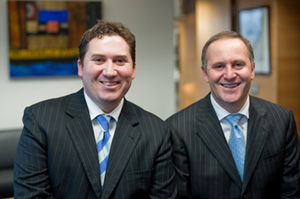 The body of Aaron Gilmore will be leaving Parliament. However the divine rapture of the presence of “Aaron Gilmore for Prime Minister” will linger long after after that pretender to the name has gone.

Read the wisdom that is Facebook on the blessed one.

Aaron Gilmore became an MP in 2008 by a hair’s breadth. Something like 40 more votes to Labour and his list seat would have gone to them. His Parliamentary career has been as undistinguished as the manner in which he got in. Now, it appears his CV isn’t as impressive as he would like us to believe either.

Remember how a couple of months back National set up NationalMPs? It was meant to be their answer to Red Alert, Labour’s frequently raucous, unstagemanaged blog where Labour’s MPs write what they want. But the Nats’ attempt is deadly dull. Either the leadership is gagging them or the Nat MPs are dreadful bores.