Interesting series of articles in The Herald, where Bryan Gould schools Don Brash on how money works.

Watch Elizabeth Warren strip Wells Fargo  CEO John Stumpf alive at a Senate hearing on ‘cross-selling’ of bank products customers didn’t need. Wells Fargo, one of the US’ biggest banks,  was fined $185million, and 5300 employees at branch and teller level were sacked. The senior executive in charge was allowed to retire with nearly $100million in stock benefits. Warren thinks the top management should be held accountable. See what you think.

Hollowing out the regions

The closure of 19 mostly rural Westpac branches is indicative of the ongoing hollowing out the regions. Neglecting Northland cost the Nats the last by election. Neglecting regional NZ as a whole might cost them the next general.

Yesterday Andrew Little criticised the banks’ failure to pass on the cut in Official Cash Rate (OCR) to we the people via mortgage / interest rate cuts. Naturally the political right went ballistic.

An idea that could catch on 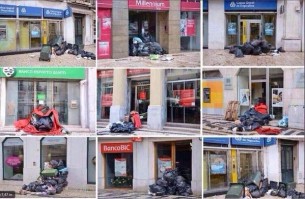 As the economy stalls it’s a great time to be a bank!

Ho ho – what am I saying? It’s always a great time to be a bank.

We need an alternative to fattening the coffers of Australian banks.

In the 1980s and early 90s the wisdom of the day dictated that our Kiwi banks were unsustainable. The buyout by Aussie banks saw huge profits and dividends head across the ditch. Russel Norman revealed an unhealthy relationship between our Reserve Bank and Westpac in an ongoing relationship that hadn’t been tendered for. This will now be tendered for and now there is a possibility for kiwi bank to win the tender. It’s about time we restored some real competition and brought more of our banking home!

The most important thing that needs to be learned is that money is nothing. Or, to be more precise, money is a tool that can be used to distribute the resources available to a society. In and of itself it has no value nor does it have a physical representation. Specifically, money is not a medium of exchange but a symbol of exchange and because of this the cost of money, usually presented as interest, should be zero.

Coal Action Network Aotearoa has this characteristic story of the problems with the cost structure of opportunistic mining in NZ.  The current world price of the coal found on the Denniston Plateau has sunk considerably below Bathurst Resources’ stated break-even price and shows no signs of rising.   What is the bet that NZ is going to wind up with another unwanted hole in the ground as a shell company gets folded up?

New Zealand banks face  a large class suit for over $1 billion in default fees over the past six years by three of NZ’s largest law firms in a case being announced today at 1pm. It is about time.

Positive Money & the Wizard of Oz

In our current system, we give men like Bob Diamond the immense power to create money. Need it be so? The Positive Money movement wishes to change that, and give that power back to Government. The first Labour Government used the power to create a better NZ – we could do that again.

Land prices rising much faster than wages. Shares, derivatives, hedge funds or other financial instruments are designed so that banks can gamble with our money. Win or lose they always get a cut. Loss comes out of our pensions and other savings. Or, if they really stuff it up, taxpayers are expected to borrow more from them to pay for it. Banks following their own self interest and are compounding economies to oblivion. The “invisible hand” has failed..

The Bankers’ Crisis is hurting people all over the world. From the deepest, darkest austerity in Greece, to the continuing foreclosure tsunami in the US, to cutbacks and job losses here, it’s the ordinary people suffering the hangover for the bankers’ wild decades of unbridled excess and profit. But at least the banks are suffering too, eh? Yeah, nah.

Cuts are good for you.

Eye on the Banks

The next  Fabian Seminar at Connolly Hall Thursday 31 March at 5:30pm will feature economist Geoff Bertram examine how the high level of New Zealand’s overseas debt that figures prominently in much policy discourse is largely an increase in foreign-currency liabilities voluntarily taken on by mainly Australian-owned banks in pursuit of private profit. It will be interesting – all are welcome to attend.

Key still wants to be Ireland

The other week, Lynn and I made fun of John Key’s dream that New Zealand would become the Ireland of the South Seas. Does he still believe we should emulate the Irish? The answer is yes. Key wants to abandon proper process and speed up work on an international financial centre for New Zealand, just like the one that helped get Ireland where it is today.

Last year, over 13,000 New Zealanders got some measure of satisfaction from ANZ’s part-owned ING in New Zealand. For over a year, half a billion dollars in investors’ funds had been locked up, during a nasty dispute between ING/ANZ and their investors.﻿ How has ANZ made things right for everyone who was hurt? They’ve renamed ING as ‘One Path’

House prices are a good indication of how the economy is going. They rose rapidly in the 2000s, stalled in 2007, plummeted in 2008, and made a slight recovery in 2009. Now they’re heading down again. The median house price is over 16% below the peak in late 2007 and I reckon they’ve got a long down way to go yet.

World Cup according to genius bankers

Economists, bankers, Treasury officials, financial wizards of various kinds, they like to pretend that they know what they’re talking about. All too often they don’t. Predicting the behaviour of complex systems is hard. Consider for example, the big banks’ predictions on the winner of the Football World Cup…

Finsec’s Andrew Campbell introduces the union’s Better Banking, a trans-Tasman campaign they’re running with their Aussie counterparts to get a better deal for bank workers and bank customers. Campbell notes the banks’ $1 billion profit in the last 3 months alone and asks “Have your fees gone down? Has your mortgage payment become more manageable?”

You know how the world has been through the worst financial crisis in decades? You know how countries like Ireland and Iceland who had made themselves into financial hubs via tax breaks for banks are now deep in the crap with burgeoning debt and unemployment? Why don’t we do what they did?

The banks, who tried to rip us off to the tune of $2.6 billion, have agreed to pay us $2.2 billion. I don’t get it. We’ve spent tens of millions so far on court cases to get our money. We’ve won every case. The judgments have been damning of the banks. So, why did the IRD agree […]

As if denying Aucklanders the chance to have their say on the super city wasn’t enough National now seems determined to tell them who their mayor’s going to be too. It’s absolutely unacceptable for the PM to be endorsing John Banks as the mayor of the super city.

Does it strike anyone else as odd that at a time when taxpayers are guaranteeing the banking system with public funds, banks have made no such guarantee to their staff about job security? While the banks made combined profits in excess of $2.5 billion and CEOs recieve salary packages of more than $2 million each, […]

Last week, John Key was bouncing on a new cloud. The Australian Government had teamed up with banks to help stop homeowners defaulting on their mortgages. Key publicly mused that ‘his’ government could do the same here. We said it was only a matter of time until English quietly killed the idea. Sure enough: “The […]

Our bank beats the rest

Today, ANZ and National Bank announced they are lifting their variable mortgage rates another quarter of a percent to 10.95%. That comes a week after the two banks, which are jointly owned, announced a net profit of $520 million in six months, up 7% on the previous period. Yesterday, Westpac announced a $244 million profit, […]