Can Bernie find a clutch and change gear?

The basic problem with Bernie Sanders campaign is that his sole political role since the start of his career has been as the archetypal outsider. He injects ideas into the political debate that didn’t get play time, but he didn’t concentrate on making those things happen. Now it is costing him.

The Big One’s Coming In.

These past few years anyone might be forgiven for believing liberals have never heard of King Canute.  How else to explain their stupid resistance to inevitable change? And now…

Christian tradition dictates Christmas falls on the 25th of December. This year though, if we simply view Christmas through a lens of ‘good things happening’, then Christmas is coming early.

Is it too early to call negative odds on Elizabeth Warren’s candidacy?

Bernie Sanders has announced he will seek the Democratic candidacy for the presidency and has described Trump as being a pathological liar, a fraud, a racist, a sexist, a xenophobe and someone who is undermining American democracy.

The Paradise Papers have provided further evidence of a small group of very wealthy people are using complex trust arrangements based in tax havens to avoid paying tax.

Where the Democrats went wrong

The reason for the Democrats losing the recent presidential vote is contained in this video.

Extraordinary day at the DNC

Quite a day for the Democrats and their convention in Philadelphia. Hillary makes history, but Jill Stein and Donald Trump may be the main beneficiaries.

The Democratic Party is holding their convention in Philadelphia. The day has started with an apology to Bernie Sanders and a poll boost for Donald Trump. Sanders speaks live at 2PM (approx).

Overnight Hillary Clinton’s campaign team has released a video that not only elegantly mimics and repeats the 1964 classic campaign ad “Confessions of a Republican” but involves the same actor who for exactly the same reasons has decided he cannot support the Republican candidate for the presidency.

So what should the next President of the United States focus on?  Military power or economic domination or international institutions?

The text of an open letter written by Ribert Reich to his friend Bernie Sanders.

Time for Bernie to stand down?

What will Bernie do now?

Trump In, Bern Out, Hillary Home and Hosed?

Donald Trump has finally got the last Republican delegates need to secure his candidacy. Bernie Sanders has lost his race (but is being pressured to stand as an independent). Now that the candidates are all but confirmed, the sideshow is over. It’s Clinton vs Drumpf in the most entertaining election in a generation.

Keep an eye on the Indiana US primary vote today. Trump has crushed all opposition and Bernie is going to pull off an upset win.

Update: Rumours that Cruz is dropping out of the race! Update: True – Cruz is gone.

Received political wisdom is that NZ is a conservative country, tending to the right. Interesting then, to see this data on our voting preferences re American presidential candidates.

Sanders is down but not out

The parties are over half way through the primaries and Bernie Sanders still has a chance of pulling off what would be a dramatic victory.

To the eternal annoyance of the establishment Democrats, Bernie Sanders is still winning primaries.

The destruction of the Republican Party

It appears that the party of Abraham Lincoln and Ronald Regan are having problems.

Why Hillary is the only candidate to beat Donald Trump

Why Hillary Clinton should be the Democratic nomination for this year’s American Presidential elections.

JMG: The Decline and Fall of Hillary Clinton

As with Corbyn, and as with Syriza, the US oligarchy is now finding out that ordinary people are refusing to buy into the status quo regardless of how much big money spin is being spun.

Recent campaign videos from Bernie Saunders and from Hillary Clinton provide interesting contrasts on who the candidates are targeting. Which approach is best?

Three Videos and a Song

It’s over fifty years since JFK, MLK and RFK died. Is this the year America finally gets their message?

The end of conventional wisdom?

After Bernie Sanders’ dead-heat with Hillary Clinton in Iowa, the race to the Democrat nomination at the upcoming convention just got much more interesting. A Quinnipiac poll now has him trail her nationally by two points. Just as with Corbyn in Britain, the pundits are tying themselves in knots trying to make sense of it.

Sanders is increasing his lead over Clinton in early states. Trump has just been endorsed by Palin. A Sanders vs Trump face off doesn’t seem as unlikely as it used to. 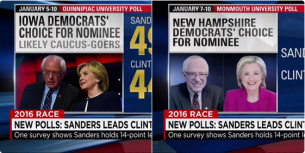 The fallout from the Paris attacks continues. The American political reaction is as important as it is predicable.

Sanders in America, Corbyn in England. If they both win, does this mark a resurgence of the political left?