Gerry Brownlee has, predictably, been incredibly high-handed and insensitive in his handling of the Christchurch earthquake, especially when it comes to the red-zone. He created a clumsy, one-size fits all, buyout system and a Catch 22 for homeowners wanting to appeal by denying them access to the geotech data they need. Labour’s done much better.

A guest post from Jarm Ohnstrong: I want to start this article with an apology. A couple of weeks ago, I attacked Labour for its criticism of National’s performance on the Christchurch rebuild while not having released its own recovery policy. That was unfair and petty. Now, Labour has released its policy. It’s deserving of the highest praise.

Your PM at work for you

Two news snippets yesterday seemed to me to capture the essence of John Key PM.  First, his response to recommendations about super, and second his prognostications on the Christchurch insurance market.

Today Labour released another substantial policy, a plan for recovery in Christchurch.   It’s a policy that works for ordinary people, and a much needed helping hand for displaced red-zone residents.

The Press reports: “The Central Christchurch recovery is under threat as quake-weary property owners start using their insurance money to buy new buildings in Auckland and overseas.” Hmm. If only they had been repeatedly warned about this for the past seven months. Hopefully, we’ll see a real plan from Labour today.

Which minister(s) will John Key fire this week? Bill ‘Double Dipton’ English, is embroiled in yet another personal corruption scandal involving a job for his brother. Gerry ‘The VIIIth’ Brownlee’s Christchurch fiefdom is seeing a peasants’ revolt among redzoners. Murray ‘drowned rat’ McCully delivered Key a huge embarrassment on Friday at the RWC opening.

“Happy” anniversary Christchurch.  And with it comes a broken promise, and an interesting legal decision.

The Tertiary Education Union has revealed that 350 jobs are for the chop at Canterbury University – 18% of the workforce. The Uni, hardly reassuringly, says its 100 to 500. The Nats blame the quake. That’s rubbish. These kind of cuts will permanently gut the Uni, leaving it in no position to be part of the recovery. National: the anti-education government.

Wrong government for the times

Fran O’Sullivan calls on the government to act on Christchurch.  Good luck with that.  This is not a government of action.  It is the wrong government for these challenging times.

The estimate of the liability for costs of the Christchurch quakes has just been more than doubled.  Thank goodness or the foresight of the first Labour government who set up the EQC in 1947.

Democracy at its finest

Anyone else feel their heart freeze a little more when Brownlee labeled Christchurch’s rebuild plan “a pretty big wish list”? Here’s a once in generations chance to rebuild a city from the ground up. Going to cost tens of billions anyway. Why cheapskate by a few hundred million? Better to build a truly world-leading city designed for the future.

The first hints of the plans for the new Christchurch are out.  What do you reckon?

I/S at NoRightTurn has John Key and Gerry Brownlee floundering to explain why Brownlee hired National Party crony Jenny Shipley and other members of the Canterbury Earthquake Recovery Review Panel at double the normal rate. Brownlee’s excuses are weak and nonsensical. It’s not good enough. 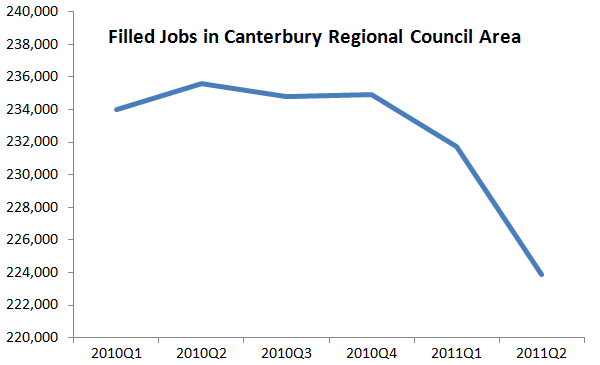 120 jobs per weekday lost but nothing to worry about. The market will right itself.

Amazing what political pressure can do. Christchurch package was clearly put together in the space of a couple of days. Buy-out at GV the obvious basic solution but will see many out of pocket. Option 2 is an admission of that but only open to some. None of the fish-hooks have been worked out. What’s Gerry been doing all this time?

The buy out offer comes as a relief for many (but not all) of the red zone residents.  Twice as many are still in limbo.  The fate of the uninsured will be a major issue.  Is an uninsured resident of Avonside any less deserving of government help than an investor in a dodgy finance company?

Eddie called it. Christchurch announcement is today. There are very high hopes. Points to watch: how many in the ‘don’t know’ category & are payouts at pre-quake market values? Notable release is this afternoon just before Key leaves. Makes it difficult to get reaction from residents in time for TV news and follow-up with Key. This post will be updated after release.

The main details of the government’s plan for the worst affected Christchurch suburbs have been release via TV3.  Partly good, partly bad, partly ugly.  While some families will be relieved and happy, others will be angry, and still more will remain in limbo.  This is only the start of what is going to be a hugely complicated process.

Chart o’ the day: getting the hell out of dodge 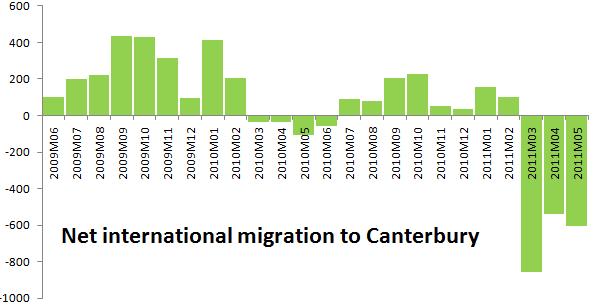 The buck stops with Gerry

Every day more stories of the poor management of the Christchurch recovery are coming out. Delays in physical rebuilding are understandable. Delays in EQC payouts are another. They undermine the city’s economy and stop rebuilding. A reader has sent in their story. It’s one of many. Brownlee should have sorted this months ago.

Gerry Brownlee says an announcement on Christchurch’s land will be made “very, very soon” but testily refuses to give a date, or even a real timeframe. I have a sinking feeling this is all a PR exercise. Just as Brownlee has got everyone really agitated, that Nice Man Mr Key will unveil the information. When it fits into his diary, of course.

The wrong man for the job

I haven’t seen the full interview of Brownlee on the Nation. If the clips on the news were anything to go by, it was more of the same. No info for Christchurch residents. No empathy for them either. More haughty bullshit. More vague excuses for delays. More focused on himself than the people who need help. He needs to go.

From Canterbury TV (good to see they are still serving Canterbury) the first news report is better than most of the other stuff I see in the TV news about Christchurch. This is what people are telling us (one sent this clip through) in e-mails and comments. Now you can see them. It is a […]

In the damaged suburbs of Christchurch, people’s lives, their emotions, in many cases their finances, are all stuck in limbo.  Residents need to know which areas are going to be written off.  What they don’t need is Gerry Brownlee telling them they are “simplistic”…

What future for Christchurch?

Lack of certainty is killing the spirit and economy of Christchurch. Before the latest quakes there were already threats of protests because Brownlee has failed to announce which areas can’t be rebuilt on. That information is even more needed now. Brownlee says it’s ‘blindingly obvious’ which areas must go. He needs to drop the arrogance and inform people.

So, borrowing to save makes sense afterall…

Do you remember back in the day when Bill English didn’t want to put any money into the Cullen Fund? Remember how we were smugly told that borrowing to save was foolish? Well, since then the Cullen Fund has made a fortune and, we know learn, the government has been borrowing to build up savings for the Christchurch rebuild.

Christchurch business owners, unable to even get to their premises in the red-zone, have asked for some help to stop going under. Gerry Brownlee’s arrogant response: “If they are such clever, gifted, and forward-looking entrepreneurs it’s pretty sad that their first port of call has to be to Government looking for a bailout”. What an arsehole.

John Key thinks he can smile and wave his way through the worst natural disaster this country has faced. He acts like all he has to do is cheer-lead and the city will rebuild itself. It’s a stunning dereliction of duty. The contrast with the vision and leadership the Left is showing is marked.

CERA’s new head, Roger Sutton, seems like a good guy. Transformative vision for Chch. Seems committed and realistic. Might just survive having to work with Brownlee. But what’s with the $500K salary? He says he wanted the job. So why pay him $10K per week while Cantabrians are getting their wage support cut?

MrSmith argues that the government’s announcement of $42 million over four years for trades training for the Canterbury rebuild is mis-directed. He says it takes too long to train a tradesperson and the money would be better spent getting building workers back from Aussie, or keeping the ones that are still leaving.

Newer posts
No feed items found.
Newer posts
Older posts
Newer posts
Only for the purposes of Electoral Act 1993 and the Broadcasting Act 1989 everything on this page is:-
Authorised by Lynn Kelvin Prentice for The Standard Trust,
3K / 6 Burgoyne Street, Grey Lynn, Auckland, New Zealand.
Translation: If you want to highlight or just to whine about something election related on this site then contact me.