An appeal to Putin’s Apologists

Guest with a life of anti-fascist and anti-war activism in their rear-view mirror, alarmingly finds at fifty that they are staring at the green shoots of fascism in their headlights.This is not where any progressive expected to be. But for the left, there is also no discounting fascist action by offering up the reasoning of the aggressor.

Trump’s not so bad: the nuclear holocaust edition

Trump’s not so bad: the holding our breath edition

Trump’s not so bad: the disappearing hospital data during a pandemic edition

Trump’s not so bad: manslaughter edition

Trump’s not so bad: the inject bleach edition

Trump’s not so bad

We are frogs in the pot.

The former leader of various NZ neo Nazi groups reckons the kiwi far right are being driven underground. TRP argues they will instead look for another home.

A few musings on heroism.

And We’ll be Reich Back …

The Southern/Molyneux hatefest is back on.

There’s No Such Thing as Free Speech

There’s never been Free Speech and that’s not actually much of a problem according to Te Reo Putake, who is no stranger to the downside of Saying Things.

There are no fascists in New Zealand…

A confluence of circumstantial evidence is all you ever get when you’re dealing with cryptofascists.

Tr*mp and Bannon on the end of the state

not with a whimper but a bang.

The constitution is screwed

Welcome to the new America.

Being human, Linda Tirado, and lessons for New Zealand.

Team Trump is pretty much calling for civil war if they don’t get their way. We are through the looking glass.

The politics of dumb anger

There are some pretty depressing political trends going on.

William Gibson of Neuromancer fame thinks that Donald Trump may be the real American fascist deal.

Donald Trump won’t rule out “tracking Muslim Americans in a database or giving them “a special form of identification that noted their religion””. Brings to mind an F word.

How to spot fascism

This. This is fascism. Giving spies the powers that they have in the States could prevent the kind of terrorism that just happened … in the States. The fascist author of this piece that the Herald disgracefully published even wrote: “if you have nothing to hide from the GCSB, then you have nothing to fear.” Do people actually say that and mean it? Yes, fascists do.

Those nice men in suits 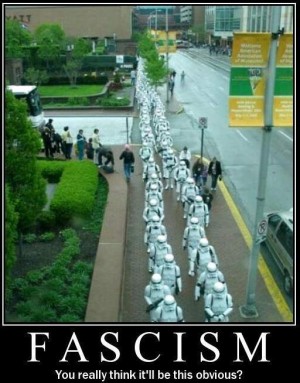 The Great Depression saw the rise of rightwing reactionarism. Out of reactionary movements came fascist governments from Brazil to Romania. We had the 100,000-strong New Zealand Legion. The Great Recession is spawning a new wave of militant reactionarism, now reaching our shores.