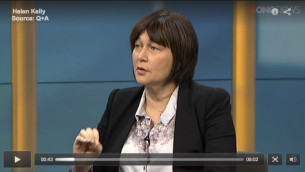 What has Michael Woodhouse actually got right about employment relations?

All the best Helen Kelly

“The head of the Council of Trade Unions has confirmed she has lung cancer.”

The deaths of forestry workers are outrageous & sad.  Helen Kelly has campaigned extremely well for change.  An international day of remembrance yesterday, a procession on parliament today – a belated govt Bill that is an improvement, but does not go far enough.

A recent study gives a strong indication of the extent of, and the recent increases in, insecure work in NZ.  It is being released at the CTU conference today, along with the launch of  a campaign to improve worker security. [Update: Cunliffe to CTU on Labour pledges]

Fairness at work and a living wage

The Government has been warned that the Employment Relations Amendment Bill is likely to breach ILO conventions.  Bridges has responded by saying that the breaches “may not be significant”.  Why is it that the Government gets all hard core when dealing with beneficiaries legal obligations but is so casual when it deals with its own obligations?

The buck stops with the directors: Pike River

Pike River found guilty of breaches of health and safety, leading to the death of of 29 miners. The CTU is calling for law changes to make company directors responsible for their company’s negligence. And the NZ MSM coverage of the catastrophe immediately after it happened?

The CTU wants to raise awareness of the effect of market pressures on working conditions and workplace safety. What killed Ken Callow?

Being fired for union membership is disgraceful

CTU press release in response to story of Todd Rippon being dismissed from his job for being a union member.

Today there was the characteristic signature of a Talley’s Group company spin that I’ve observed over the last five years on this site with their worker relationships. They lie, prevaricate, and fracture the truth. They appear to be completely untrustworthy and incapable of good faith bargaining.  In my view they are the absolute arseholes of NZ managers and companies.

The CTU have launched an appeal for donations towards the food and essential bills of AFFCO workers.
Please Donate to NZCTU DISPUTES FUND, 38 9007 0894028 08. Money will go direct to workers.

CTU President Helen Kelly talks about Pike River and the death of security guard Charanpreet Singh Dhaliwal and what these tragedies tell us about employer accountability for health and safety in the workplace.

Helen Kelly on the Hobbit dispute

Helen Kelly has published a full and detailed account of the Hobbit dispute.

The result is a story that leaves you in no doubt about big business’s class war on workers.

Or which side this government has taken.

Some clarity on the Hobbit dispute

After days of trying to read the media and rumour mill tea-leaves on the Hobbit it was time to do some fact checking.

It turns out this has been a hard lesson in how the international film industry works.

Helen Kelly has brought the two parties in the hobbit dispute together.

That’s a job well done and a big step in settling this dispute.

But there is still the broader issue of independent contracting being used to circumvent employment law and whether it could be fixed by legislation.

Heather Smith, the pharmacy worker who was sacked unfairly under the 90 day fire at will law and featured in a recent advert for the campaign has won a CTU-backed case against her employer in the Employment Court.

John Key challenged the unions to “put up or shut up”. So they’re going to put up. The CTU has launched a campaign to name and shame businesses that are abusing the fire at will (90 day probation) bill. It’s a campaign based around personal stories. Heather Smith tells the first of many…

A few brief points about the attacks on workers

Having just watched the q + a interview with Council of Trade Unions President Helen Kelly and Alasdair Thompson from the EPMA (a must-watch, Kelly did a great job) I think there are a few things that need to be said:

Happy International Women’s Day. If only there was something to celebrate.

â€œWe are deeply concerned about the current attacks on workers’ rights that will badly impact on women,â€ said CTU President Helen Kelly…

Some good comments from CTU president Helen Kelly in the Dom today on the Government’s posturing over MP pay increases. “The Government is trying to make a hero out of anybody who doesn’t get a pay increase, and I’m worried about that because there are a lot of workers out there they’re putting pressure on […]

The Fire at Will campaign

It’s good to see the Council of Trade Unions offering solidarity to non-union workers who are subject to National’s fire at will law by providing free legal and industrial support. As Helen Kelly said on the news last night, when the Government fails in its basic duty to protect workers from arbitrary employer power then […]