A couple of morning cartoons 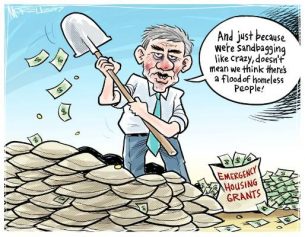 Most people would be shocked to learn that each WINZ case manager is assigned the target of getting a certain number of people off the benefit every month. This is one of the reasons why we have such a punitive and aggressive welfare system. Fewer than half of those removed from the benefit go to jobs. The Nats neither know nor care what happens to the rest, but links to the rising number of homeless and our shocking suicide statistics should be investigated.

Government admits it has “no idea” on homeless

Today in news that makes you want to scream: “Deputy Prime Minister Paula Bennett has admitted “in hindsight” the Government’s response to the housing crisis has been too slow.”

Labour MP Clare Curran has been camping in Dunedin’s Octagon to protest against the MSD’s treatment of two homeless mothers. Bravo Clare for putting yourself on the line to draw attention to this issue!

Flavell has “no idea” how homelessness got so bad

Could it have anything to do with the government of the last nine years, and the policies that you and your party have been supporting?

Spare a thought for the homeless tonight

Not just because it’s winter, and the weather is lousy, but also because of this…

Those compassionate conservatives of the National Party have a message for the increasing number of homeless who occupy our Brighter Future.

A tin shed and a cup of cold Milo

Funny how the Nats can always find millions for vanity projects – and sweet FA for the homeless.

Motels are full of homeless so now what?

Ordinary people are priced out of home ownership and increasingly out of renting, the state-housing safety net has been deliberately run down, and now the ambulance at the bottom of the cliff is full. National leaps into action – by asking the Salvation Army for ideas…

Motels are not state houses

It’s almost as if deliberately running down state housing stock doesn’t make the need for homes magically go away – who could possibly have predicted that?

Bill blames the blowout in emergency housing grants on the “hidden homeless”. Hidden only from those who will not see. Hidden only from a government that deliberately chooses for political reasons not to collect the relevant data.

The shame of homelessness

A rich old white idiot, who would only be amused at our anger, has vented about the homeless, in a piece that shouldn’t be rewarded with our clicks.

What Paula is proud of

Apparently it’s “getting homeless people into homes”. Given the ongoing explosion of homelessness, just think how much scope she has to make herself proud next year…

Judith Collins yesterday said that child poverty is the fault of parents and not the fault of her Government.

Who would have thought that a surge in homelessness would result in a spike in crime, and that a dramatic increase in the number of people with no or compromised housing situations would cause an increase in burglaries, robberies and assaults.

Labour, the Green Party and the Māori Party are have released their Ending Homelessness in New Zealand report and are calling on the Government to immediately adopt the 20 recommendations.

Phil Twyford argues housing will be the defining challenge for the next Labour-led Government, and sets out Labour’s reform agenda.

Stand Up for Housing: Protest today in Aotea Square

Young people, union members, and other Aucklanders will meet in Aotea Square today to make some noise about the devastating Auckland housing crisis.  Stand Up Youth Union Movement and Unions Auckland are hosting the Monopoly-themed event, which will highlight the damaging effects of the crisis and call on local and central government to do a lot more to fix the housing market.

Paula Bennett improves supply of housing, or does she?

National’s latest plan to do something about the housing crisis is to buy a Motel and kick families who stay there out on the street.

Government seeking to remove property buy back rights under urgency

Nick Smith has introduced a bill into Parliament which he wants to be passed under urgency without select committee oversight.  The bill takes away the right of any prior owner of land taken under the Public Works Act to have housing land offered back to them.  To do this under urgency is banana republic stuff.

John Key has used some very dodgy figures to claim that the housing crisis was worse under Labour than it is now.

Illustrator and commentator Toby Morris has animated TA’s story: “What do you want most in the world,” John Campbell asks TA, who has been living in a van with her family since February. “A library.”

The cross-party inquiry into homelessness is under way

After National blocked a proposed official inquiry into homelessness, Labour, The Greens and The Maori Party went ahead with their own. It will no doubt come up with useful recommendations. But to see them implemented we will need to change the government.

On #Planetkey everyone owns a home

In Parliament yesterday John Key showed a clear lack of understanding of what being poor in New Zealand entails.

Al Jazeera on NZ homeless – watch it and weep

Al Jazeera: Once a pioneer of the social welfare state, New Zealand now has over 40,000 people who are homeless, forced to live in their cars and in garages as a result of rapid house price and rent rises and a shortage of social housing. Al Jazeera … charts the country’s fall from and egalitarian society to one with deep divisions of wealth

Labour plans to crack down on negative gearing

Labour has announced that it will review tax exemptions for landlords achieved through negative gearing.

Submit to the Cross-Party Homelessness Inquiry