Why no inquiry into abuse in state care?

As we celebrate Parliament’s apology for historical convictions for homosexuality, it surely raises the question of why the government is so hardheartedly against an inquiry into historical abuse.

Well well. What will you do now Bill?

Impossible to refuse an inquiry

Bill English should stop being evasive and just get on with an inquiry into the fiasco outlined in Hit and Run. The latest developments make any other outcome ridiculous. The longer English delays the worse he looks.

Human Rights Commission calls for an inquiry – English says no 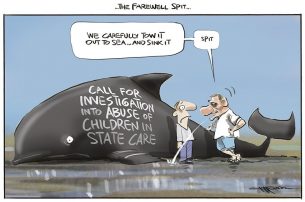 Nothing to hide, nothing to fear

I know, let’s put on a production of Hamlet, but leave out the role of the Prince of Denmark.