Breaking news on the Keep Our Assets Referendum

John Key has today announced that the keep our assets referendum will be conducted by postal vote later this year.  He has also announced the Christchurch East by election will occur on November 30.  And National MP Chris Tremain has announced that he will not seek re election next year.

Breaking: Citizen’s Initiated Referendum Is On

Russel Norman’s let the cat out of the bag with a series of tweets: “We’ve done it!! Citizen initated referendum on asset sales is on! #fb” and “OOps, there was an embargo on the CIR result until 1pm which I didn’t realise until after I tweeted. Apologies to Clerk of the House”

The eight week window to gather more signatures for a referendum on asset sales is now over, and the new signatures will be presented to Parliament today. Lots of them…

The Nats must be panicking about the prospects for the sale of Meridian – because they’re resorting to extraordinary tactics.

John Armstrong may think that “the question now – as far as most people are concerned – is whether Mighty River Power shares will be a good investment,” but Scott’s been out there to find out what ‘most’ people really think…

The Government must be crazy

Come one, came all to National’s fire sale! See how fast we can flog off your assets! Low prices, great returns to foreign investors!

If we can’t afford to buy the assets back, we should at least make clear we will regulate them severely and take the profit out of electricity companies…

Unanimous decision by the 5 judges to dismiss the Maori Council’s appeal.

The Herald reports that the Supreme Court will not meet the Government’s timetable for its decision on the Maori Council’s challenge to Asset Sales.

Get your asset sales petitions in

If you’ve got any asset sales petitions hanging about, quickly send them in to the address on the bottom.  The Keep Our Assets coalition are shortly to send in the petition for the Electoral Commission to start verifying the 350,000-odd names they have.

This weekend a major nationwide collection drive aims to reach the signature target to force a citizens initiated referendum on asset sales. Can you help to collect signatures?

It looks like the Nats’ attempt to pull a swindle on the meaning of “51% ownership” has been averted.

Between 1 and 2 thousand people turned out in Dunedin today to march in protest at the National government’s plan to sell our assets. 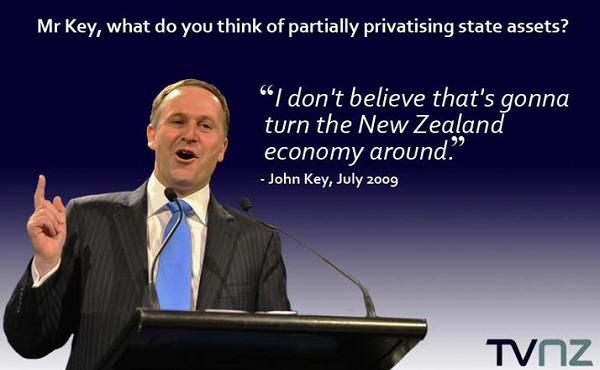 Not for sale hikoi arrives in Wellington

The Aotearoa is Not For Sale hikoi departs from Te Papa for Parliament at midday today. There has been great turnout in towns and cities all over New Zealand. Join in if you can. Also, remember to sign the Keep Our Assets petition and get involved (via Labour or the Greens) in collecting signatures. We can still save our assets.